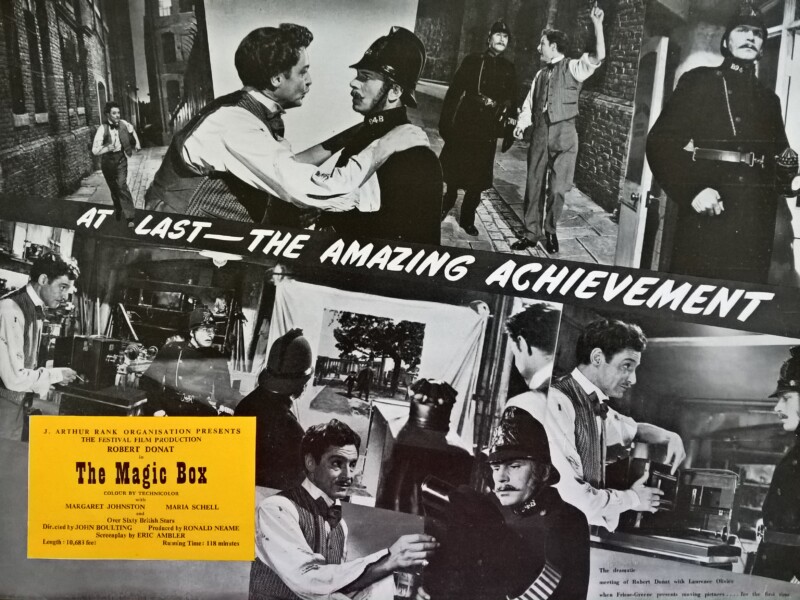 That exchange in The Magic Box is one of the most famous movie moments for both actors in the scene: Laurence Olivier as an unnamed policeman, dragged in off the street to witness moving pictures for the first time and Robert Donat as the inventor, William Friese-Greene.

A shame that, as far as we know, no such thing ever happened – Friese-Greene certainly never mentioned it. But when did that ever get in the way of a great biopic moment? I mean, Freddie Mercury didn’t tell his bandmates he had AIDS just before Live Aid, as he didn’t get his HIV diagnosis for another two years, yet that’s how it’s told in Bohemian Rhapsody. The story of the policeman pertained to Birt Acres and Robert Pauland happened five years later, describing the first time they got one of their films working in a kinetoscope peep-show machine – but Will Day, Friese-Greene’s greatest posthumous advocate, reassigned it when talking to reporters just after the latter’s death.

Whatever the doubtful veracity of the scene, its enduring qualities belong to a truth that is nonetheless encapsulated within it. In some extraordinary way, Robert Donat seems to be channelling the person he is playing, depicting the gabbling excitement, near hysteria and ultimate ecstasy of the inventor. In case you think that’s just me getting carried away, when his daughter Ethel saw the film, having been in her early teens when her father was first working on moving pictures, she declared it was ‘exactly like him’. According to Donat, not only Ethel, but his director and producer all referred to him as ‘Willie’ during the filming, just as those who knew the man himself had.

R H Cricks was a well-respected expert on cinematography, who advised on the film and had known Friese-Greene somewhat. He later stated that, despite being sceptical of some of the inflated claims made for Friese-Greene in the biography on which the film was based, ‘I must place on record that Robert Donat not only played Friese-Greene but in an uncanny way was the Friese-Greene whom I knew.’

Ironically it seems to have been Cricks’ poor advice that led to the movie showing Friese-Greene shooting his first film with entirely the wrong camera – which then becomes a projector.

Donat was 46 when the film was shot, an international star who had gone to Hollywood, decided he didn’t like it and returned to British stages – both in the theatre and the studios. He had chosen his roles carefully in his 16 preceding films, making a big impression as The Count of Monte Cristo, starring in the Hitchcock classic The 39 Steps and, more recently, a popular adaptation of The Winslow Boy. But the role that unquestionably made him was 1939’s Goodbye Mr Chips, when he beat out Clark Gable in Gone with the Wind, James Stewart in Mr Smith Goes to Washington and Laurence Olivier in Wuthering Heights to walk away with the Oscar for Best Actor.

That role had required him to play the eponymous hero at many stages in life and perhaps The Magic Box appealed in part because this too offered the acting and make-up challenge of playing Friese-Greene all the way from his youth to his moment of death at age 65. The script was written by Eric Ambler, who was, at that moment, pretty hot property as both novelist and screenwriter. Although built around Friese-Greene’s final hours, it employs an unusual two-layered flashback structure that brings the Eureka scene close to the end of the film. Behind-the-scenes photographs reveal that Donat applied his strategy of literally graphing out, on a board on the wall, the emotional state of the character throughout the film. Below it were rows of photographs of Friese-Greene at different stages in life.

The production was done as the film industry’s contribution to the 1951 Festival of Britain and famously boasted 60 stars popping up in blink-and-you’ll-miss-it cameos. Announced in June 1950, it didn’t start shooting until the following January and barely made it under the wire to be part of the festival, with a gala première on the 18 September 1951. Noel Coward, Terry-Thomas, Violet Attlee and many other luminaries were present, but Robert Donat was not.

The story given was that he was in hospital having an operation on his nose, but later rumours said he was in a clinic in a very poor state of health. Donat had been plagued for much of his life with issues to do with asthma, which he credited as being in part psychosomatic, and these may well have contributed to delays with the film. But his health was definitely failing, and he would make only two more movies. He died of a cerebral thrombosis in 1958 at the age of 53, just days after wrapping on The Inn of the Sixth Happiness.

Although generally praised, The Magic Box was not a hit. The figure Robert Donat plays in it may be likeable and charming in certain ways, but is ultimately obsessed with his inventing to the detriment of all those close to him and to himself. He is not a hero, what he does is not heroic, and the film tends to leave one with a heavy heart. It’s that complexity that appeals to me, but it couldn’t set the box office on fire. Nonetheless, Robert Donat must have been heartened by the tremendous reception his performance got from the critics, with comments like, ‘Donat has never done better than this poignant study’ and ‘Robert Donat gives an elaborate, beautifully observed and beautifully gradated character study’.

But above all, it was that scene, with Olivier and Donat, which dominated every account. Such was its reputation that just weeks after the premiere one article described it as ‘already famous’. The leading film critic C A Lejeune was not convinced by the film, describing it as, ‘a pretty dismal story to offer as screen entertainment’. But even she had to concede, ‘The scene is brilliant, and will be remembered long after the rest of The Magic Box is forgotten.’ Rarely has a truer word been written by a critic.

One hopes that Mr Donat was a very happy man.