The Things They Get Away With in Public Caleb Parkin 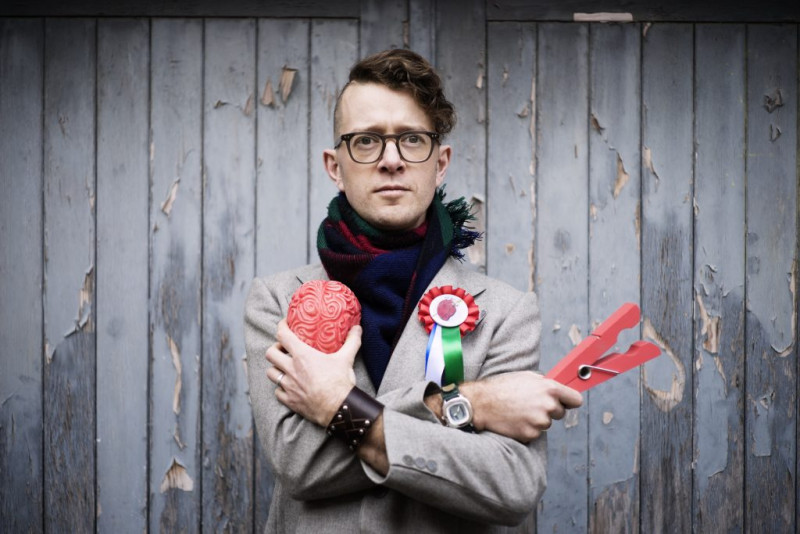 The Things They Get Away With in Public

a leather daddy in the Pride Parade once said
when our terrier went to greet a passing lurcher,
tilting his head up as though trying to sniff
the sun. Today, on my way to our dog show
I pause to buy emergency umbrellas. Never
thought I’d say this to a bloke, the woman on
the counter says, but I like your gold nails. The deluge
rains off the ‘most well-groomed’ round –
but we queue, bright-brollied and boofy-tailed,
to sign up for other categories. Best Veteran.
Best Dressed. Dog We’d Most Like to Take Home.
Not everyone takes home home-
made rosettes, but we all go home
together. Because our dogs are bestowed with
full names, like Patsy Cline or Jean-Floof Picard.
They have catchphrases, costume changes,
solos. They say, Keep away, peasant. They migrated
on happy buses from Romania; arrived via canine
transgressions in Slough, advertised on Gumtree.
Our dogs stick tongues in stranger’s mouths,
then savour their slobbery chops.
They don’t care what rhymes with ‘fart’.
And they were there when we got the phone call,
slept on our chest the days after; mirrored our
injury, titanium plate in left leg. Our dogs are food-
sexual, sofa-sexual, partial to a wiry senior
jack russell. They say, You want this, you can’t
have it, then double-paw high-five you, sporting
a wonky rainbow tie. Our dogs nibble a metre-
long bull’s pizzle, are proudly both Lady
and Tramp. They’re so flexible, they check
the apps with the thumbs of their tongues.
They say, Don’t touch me! then howl on demand to
Celine Dion. They’ll wear a darling little baseball cap
for you. Until they won’t. They say, I Yap What I Yap
while wolfing down an entire chocolate cake.
They’re unapologetic toy-box thieves. Our dog
is a chihuahua, in full leather regalia, roaring
from its pram: greeting the world with wide
open nostrils and, when necessary, teeth.

Notes:
– Huge thanks to all those who shared their doggy anecdotes on at the Pride Dog Show!
– Patsy Cline and Jean-Floof Picard are real dogs and I salute them.
– ‘bull’s pizzle’ is a dog chew made from – yes, you guessed right.