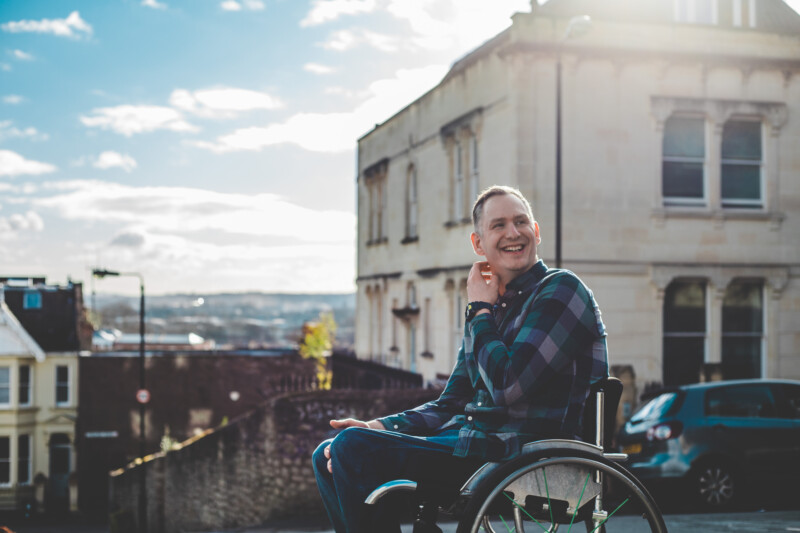 A quick look through James McAvoy’s filmography shows that he has played a character with a disability, or ‘cripped up’ as it is known in the disability community, at least seven times.

That’s seven times he has taken a role from a disabled actor that could have been played more authentically.

Bryan Cranston, who received criticism in 2019 for playing the role of a quadriplegic billionaire in The Upside, seems at least open to have the debate about where the line is between what you can and cannot portray as an actor. One of his arguments about taking the role is that it was a business decision. The film made $125m worldwide; a compelling argument but does it make him right?

And where does that argument make sense in a film such as 2019’s Come As You Are in which three disabled friends take a road trip to a brothel to lose their virginity? None of the three main actors in that film have a disability and it took $55,000 at the worldwide box office. Granted the film was released amidst a global pandemic but there is nothing to suggest that had it been released in any other year it would have been breaking box-office records. The reasons given by the film-makers as to why those actors were chosen were, they said, down to time and resources. And I do have sympathy for that argument. Having a small budget and little time to make a film you have to make business decisions, and at least with Come As You Are there were other disabled actors cast in the film, though these were minor roles.

Why does it matter? Well as a wheelchair user, it matters to me. It matters because accurate representation of disability in cinema and equal opportunities for disabled actors are severely lacking.

One film not restricted to the same budget and time constraints as Come As You Are was 2009’s Avatar. A box-office return of $2.8b against a budget of $237m. The lead character is Jake Sully, a former marine and paraplegic played by non-disabled actor Sam Worthington.

I first watched Avatar when it was released and chose the IMAX at Waterloo in London, completely at capacity for the screening. It’s a huge cinema based on a roundabout next to Waterloo station. It’s impossible to miss. It fitted my desire to see this film on the biggest screen possible.

Much was also made of the fact that many of the screenings would be in 3D to create an immersive viewing experience.

Let’s remember this is a sci-fi film, set on an alien moon. There are spaceships, walking robots, incredible technology that allows you transfer your consciousness into the body of a different species. And Jake, who pushes onto the screen for the first time in his wheelchair, one that looked more basic than the one I arrived at the cinema in.

As he pushes onto the base he is met with the phrase ‘Look, it’s meals on wheels’. This was when I started to become very aware of my presence. This whole set-up is designed to make the audience start to feel sorry for Jake: the barbed comment, the wheelchair that looks prehistoric alongside the advanced technology, and the fact that he is only there because his able-bodied twin had died and they have no option but to turn to him.

These are the first few seconds of the film. Perhaps I’m over thinking it, perhaps the rest of the cinema was not aware of this, perhaps little thought was given to how the disabled community would feel upon seeing this film as it was intended to break box-office records, not change perceptions. Perhaps. But these things matter. They matter because, intended or not, these are the messages they give.

As a paraplegic it was the nuances and small details I saw: the way Sam Worthington’s legs had been made to look atrophied through CGI; the way he is able to lift and wear a heavy backpack that should have knocked him off balance and pushed him forwards; the way he seems to labour when transferring out of his chair; or the fact he doesn’t sit on a cushion. That last point is probably the one that annoys me the most. I’ve lost count of the times I’ve watched a film, seen a wheelchair user and they are not sat on a cushion. Cushions are essential for pressure relief. Paying such little attention to these details shows quite clearly that portraying an accurate depiction of paralysis was not high up on the agenda.

For those who may be unfamiliar with Avatar, the year is 2154.Humans are mining Pandora, a habitable moon, home to the Na’vi, to replace natural resources that have been depleted on Earth. To learn more about the moon, scientists place the consciousness of genetically matched humans into Na’vi hybrid avatars. The head of the security force protecting the scientists tells Jake that he can have his legs restored if he gathers intelligence on the Na’vi.

You with me? Let’s unpick this some more. The year is 2154. Now let’s look at Jake’s wheelchair again, a wheelchair that is less developed than the one I sit in to write to this. Do we really think if we can fly to a moon in another planetary system that wheelchairs will not have advanced? Or that by that point a cure for paralysis will not have been found? Or if there is one the only way to access that cure is to pretend to be an alien lifeform? What does that tell us about how society views disability?

The film is about four days long and the above is a lot to process so I was totally unprepared for what came next. The first time Jake’s consciousness is placed into the Na’vi hybrid and he begins to walk.

In all my years of watching films in the cinema I am yet to have a visceral experience like the one I felt when Jake, as the avatar, first stretches his legs, stands, find his balance and then goes outside onto the basketball court, starts running and feels the sensation of grass on his feet. With the 3D glasses, viewed through the eyes of Jake, this felt incredibly real to me and is the nearest I have felt to walking since my accident. The result was profound and I started to cry. At what I was experiencing, at what Jake must have felt, at being jealous of someone using an avatar to experience by what at that point should have been medically possible.

This is one of the parts of the film and the treatment of disability that I think is handled well. However, I was angry at the implied reasoning that the carrot of walking again at whatever the cost was worth casting aside everything and everyone you know. This film is set almost 150 years in the future and the views of disability clearly haven’t progressed in all that time. The impact of what I felt was difficult to process but I tried to articulate it in the poem below which I wrote on leaving the film and it appeared in my first poetry collection published in 2019.

Walking Again Through Avatar
ACT 1
In 3D glasses I walk as Sully’s blue-skinned
Na’vi, mobile again. I’ve got this. Folded
into my velvet cinema seat, somehow
unbalanced, running on feet not owned
for fifteen years. I breathe, I believe.

ACT 2
Behind the glasses tears escape
the red-blue hue as I escape
into celluloid. Trapped by my
body, prisoner in the IMAX,
grateful for the black box darkness.

CREDITS
I’m not ready
to wrench atrophied legs from seat
to wheelchair. Groundbreaking. I ran.
The names of those who helped
me challenge surgeons’ words roll before my eyes.

In many ways the film left me frustrated for all the reasons outlined above. But in many other ways I was grateful. At the point of watching this film I had been paralysed for 13 years and I was grateful to have felt in some way through the 3D glasses what Jake felt when he takes his first few steps. And I might have disagreed with what much of the film says about disability but seeing a disabled character front and centre in one of the biggest films of all time is important. It is progress. In many ways Jake is the heart and moral compass of the whole film. That too is important.

At the end of the screening I made sure to avoid eye contact with those who had also watched the film. I couldn’t help thinking that they were looking at me asking the question, what would I have done to have regained my legs?

It’s a question I have asked myself many times, would I leave my body, my life and the world I knew behind to place my soul into another species just so I can walk? I don’t believe so and by 2154 I hope it’s a question that paraplegics aren’t actually faced with. Or if films and cinema are still a thing then, that films with disabled characters are at least played by disabled actors. That wouldn’t be too fantastical, would it?

Stephen Lightbown is a poet and spoken-word artist, born in Blackburn, who now lives in Bristol. He writes extensively but not exclusively about life as a wheelchair user.