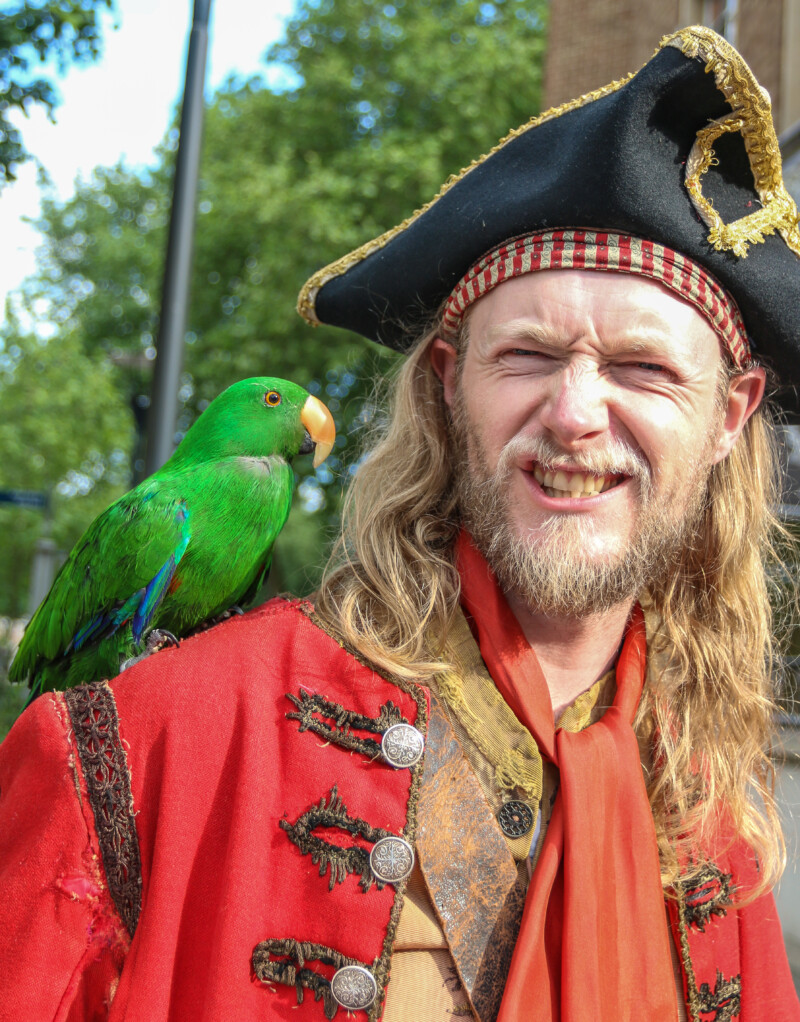 Bristol is where Long John Silver ran a pub called The Spyglass; where Squire Trelawney found and fitted out the good ship Hispaniola, and where young Jim Hawkins stepped off the coach from Devon to set sail on the biggest adventure of his life – the search for Captain Flint’s buried treasure.

Full of pirates and buccaneers; hidden spy holes; dark secrets, dirty deeds and lashings of doubloons. Hear the story where it all began: Bristol docks.

Treasure Island was the book chosen for our first Great Reading Adventure back in 2003. It was the perfect choice for a mass-read as its thrilling tale can be enjoyed by both children and adults. On launch day actors from the street-art company Desperate Men, disguised as marauding pirates, sailed to the heart of Bristol’s Harbourside in the replica of John Cabot’s Matthew. There they were greeted by hundreds of local school children, who received copies of the book and were entertained with juggling, sea shanties and cannon fire.

We distributed 8,000 free copies of the Penguin Classic edition along with 340 Puffin and 145 Ladybird editions and 56 Captain Pugwash books (for younger readers). A high-quality illustrated readers’ guide was produced and also distributed free of charge. It contains a short biography of Stevenson, a summary of the plot, profiles of the main characters, discussion topics and references for further reading as well as historical background information on the Bristol docks, a life at sea in the eighteenth century, privateers and pirates. It can be downloaded as a PDF at the link below.

Extract from the novel

The night passed, and the next day, after dinner, Redruth and I were afoot again and on the road. I said good-bye to Mother and the cove where I had lived since I was born, and the dear old Admiral Benbow – since he was repainted, no longer quite so dear. One of my last thoughts was of the captain, who had so often strode along the beach with his cocked hat, his sabre-cut cheek, and his old brass telescope. Next moment we had turned the corner and my home was out of sight.

The mail picked us up about dusk at the Royal George on the heath. I was wedged in between Redruth and a stout old gentleman, and in spite of the swift motion and the cold night air, I must have dozed a great deal from the very first, and then slept like a log up hill and down dale through stage after stage, for when I was awakened at last it was by a punch in the ribs, and I opened my eyes to find that we were standing still before a large building in a city street and that the day had already broken a long time.

Mr Trelawney had taken up his residence at an inn far down the docks to superintend the work upon the schooner. Thither we had now to walk, and our way, to my great delight, lay along the quays and beside the great multitude of ships of all sizes and rigs and nations. In one, sailors were singing at their work, in another there were men aloft, high over my head, hanging to threads that seemed no thicker than a spider’s. Though I had lived by the shore all my life, I seemed never to have been near the sea till then. The smell of tar and salt was something new. I saw the most wonderful figureheads, that had all been far over the ocean. I saw, besides, many old sailors, with rings in their ears, and whiskers curled in ringlets, and tarry pigtails, and their swaggering, clumsy sea-walk; and if I had seen as many kings or archbishops I could not have been more delighted.

And I was going to sea myself, to sea in a schooner, with a piping boatswain and pig-tailed singing seamen, to sea, bound for an unknown island, and to seek for buried treasure!

While I was still in this delightful dream, we came suddenly in front of a large inn and met Squire Trelawney, all dressed out like a sea-officer, in stout blue cloth, coming out of the door with a smile on his face and a capital imitation of a sailor’s walk.

‘Here you are,’ he cried, ‘and the doctor came last night from London. Bravo! The ship’s company complete!’