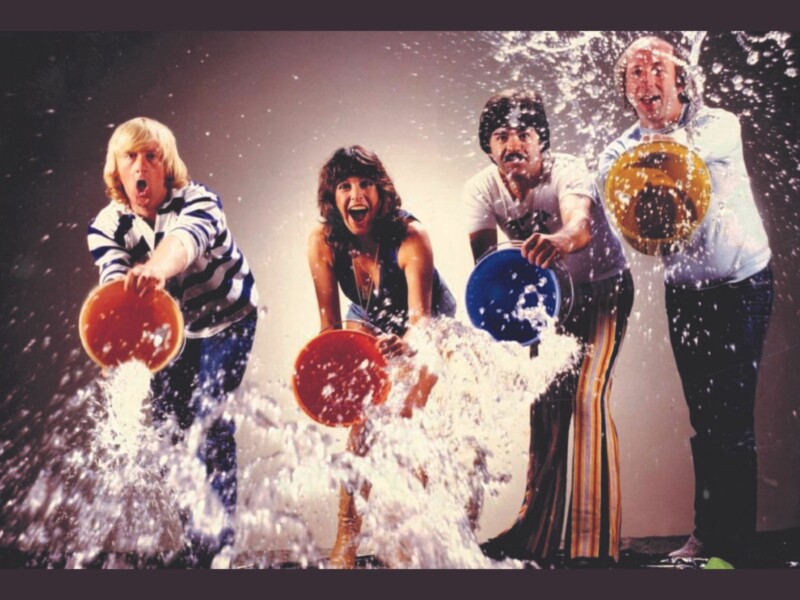 He hosts the forthcoming TISWAS Reunion event with Slapstick Festival on Saturday 16 April.

Saturday mornings 45 years ago. Pocket money in hand, quick visit to McTaggart’s newsagents to get sweets, then back to the living room. TV switched on. Dad would come in and we’d wait eagerly for the ATV ident and the start of TISWAS –Today is Saturday, Watch and Smile. The best children’s show ever and one that appealed just as much to adults as it did to children, as my dad would say if he had the chance.

Normally we wouldn’t watch ITV, and my younger brother preferred Noel Edmonds’ Multi-Coloured Swap Shop on the other side, so there was sometimes tension. Loving Laurel and Hardy, I wanted laughs and slapstick, custard pies and silliness after a week at school, and TISWAS delivered this in buckets, as well as endless buckets of water. They even sang ‘The Bucket of Water Song’ and made it to Top of the Pops, much to the annoyance of the BBC, I guess.

I loved every part of the show – and still love watching the clips now. I loved all those who appeared: the presenters Chris Tarrant and Sally James and their sidekicks Bob Carolgees and John Gorman – who played many roles from Smello to the studio janitor Albert Grumble. I loved the guest stars – too many to mention here – and the adults who got to be in the cage (I was so jealous). Weekly, they endured a barrage of custard pies and water. Perhaps some of them left swearing ‘never again’ after the Phantom Flan Flinger and Flanderella had done their evil work, though most must have left happy.

Lenny Henry was a regular guest and he became a special star. I loved – and repeated endlessly – his Tommy Cooper impersonations, his Trevor McDoughnut sketches when he satirised the legendary newsreader Trevor McDonald (it was such a joy when McDonald came on to surprise Henry one week) and his endless cries of ‘Compost Corner’ which we repeated in the style of Crackerjack.

Henry threw many a custard pie, too. Most weeks there were mock quizzes where families got flanned (Flan Your Family) and various guests were attacked by the flan flingers. The Nolan Sisters got flanned, as did the whole of Legs and Co after losing to Dennis Waterman wearing a school cap. Thinking back now that does seem very odd, as did the surreal piano-playing pig.

It was, for many of us, an introduction to music. Every pop and rock musician seemingly wanted to appear even if they knew many of them would get soaked or flanned. I saw Robert Plant, Toyah Wilcox, Kate Bush, Noddy Holder and Blondie. Sally even had her own slot with her ‘almost legendary pop interviews’. One week John Peel was in the cage. Many were taunted mercilessly and other TV shows were mocked, often with their presenters mocking themselves. It was affectionate mockery, though. They must have been queuing up to get to the studio.

I had a special affection for Bob Carolgees and his friends Spit the Dog and Cough the Cat who, alas, featured all too rarely for me. I’ve never liked most puppet shows (except for those by Gerry and Sylvia Anderson) – and ventriloquist dummies like Lord Charles left me cold. Even though he was pretty disgusting, Spit was for me as funny as any great comic, and with the gentle soul Cough the Cat they made the perfect pair.

Before TISWAS, children’s TV had been mostly rubbish – and it was better than the boring alternative of swapping old toys around which the BBC offered. It was anarchic, full of noise and laughter, and most of all, you saw people get a custard pie in the face. It was a welcome respite from an education that I was struggling with.

No TV company could do it now. It certainly wouldn’t pass the Bechdel test and Health and Safety rules would have stopped much of it (imagine doing a risk assessment?). It’s remarkable to think what was allowed then. In one show a girl’s choir called The Ramblers sang ‘The Sparrow’ and got soaked and flanned. In the same show they showed clips from the soon-to-be-released Life of Brian, the source of much controversy at the time, and had Status Quo and Blondie on. I missed the episode when they had a live bear in the studio and it got away; that certainly couldn’t appear today.

TISWAS, The Banana Splits, Fireball XL5, Thunderbirds and an anglicised version of a French series of Robinson Crusoe (which played every summer and had the most wonderful theme tune) are what I remember of my childhood TV watching. I watched many programmes – mostly dross – but I’m glad I invested my time on custard pies, strange creatures, space travel and a desert island. Now, in my sixties, I remember them all; can still recite lines from them, repeat their catchphrases, though often to the point of boredom I fear, and sing their songs.

Some of the presenters moved to an evening slot with a new show, OTT – Over the Top. I saw a few episodes, but it didn’t work and didn’t last long anyway. TISWAS had an innocence and a sense of fun that all could share. It appealed to different age groups; the older you were the more jokes you got, but it was always for children and made us feel a little bit adult, too.

In his autobiography, Lenny Henry said he has never laughed so much since he was on TISWAS. I don’t think I have either. It made Saturday mornings special – and often Monday mornings too as we relived in the school playground what we saw two days before. One time we even did the Dying Fly Dance (what did the teachers make of that?).

I’m looking forward to talking with the four bucketeers and Matthew, the legendary singer of ‘Bright Eyes’. I owe them a lot for making me happy. But I’m glad about one thing; although I’d like to meet him, the Phantom Flan Flinger – the most evil being in the cosmos – won’t be around. Or will he?

A version of this article originally appeared on The Everyday Magazine website.