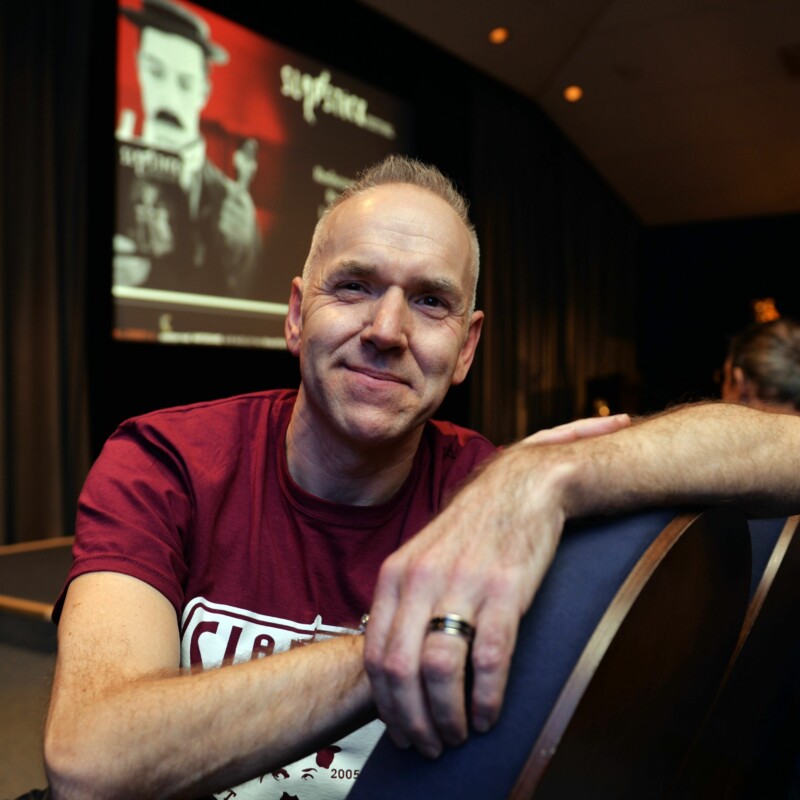 My life has transformed unrecognisably over the past two decades. Working moments today are consumed with dreaming up creative ways to engage new audiences with silent film, especially silent film comedy. But it wasn’t always so.

In my less conscious cinema-going days in the 1980s and early 1990s, I didn’t know a director from a producer and knew even less about the creative process of making a film. I enjoyed mainstream films and blockbusters and had no interest in delving any deeper. Films of this era were both captivating and ground-breaking.

In 1992, alongside a course in integrative counselling, I signed up for a Film Studies A-level. Film had always offered an escape for me, and so I felt incredibly enthusiastic about the prospect of ‘studying’ film. It sounded like a wonderful opportunity to learn about the greats and have some fun doing so.

On the horizon were three days of cinema that were set to irreversibly change me and the course of my life, forever.

Silent Film Study Day, 1993, Watershed, Bristol. Audience: 40. Live piano.
My first experience of silent film, which proved to be the day that a burgeoning passion became ignited, was at Watershed for a study day in 1993. I confess that at the start of the day I was one of those people who ignorantly viewed silent film as a redundant antiquity, despite never having seen a single frame. I took my seat with low expectations and some trepidation. At least we were in a cinema for the day. That was exciting enough to get me through.

It began with lecturer and silent film champion Norman Taylor screening a film called The Unwritten Law (1907) from ‘the primitive period’, as he called it. A true-crime drama based on the controversial Thaw and White court case. Shot in a single long take with a fixed camera, it was interesting but uninspiring. Next, another tutor, Jim Cook, astutely introduced a selection of moments from the best silent cinema films ever made. I still remember vividly: D W Griffith’s Mender of Nets (1912), Cecil B DeMille’s The Cheat (1915), Battleship Potemkin’s magnificent Odessa Steps sequence, F W Murnau’s Nosferatu (1922) and King Vidor’s anti-war classic The Big Parade (1925).

I felt as though I was discovering a whole new art form, and my familiar world of cinema became suddenly expansive. The impact of those first few extracts of silent film was immeasurably profound. I wondered: why don’t people know about these films? Why are these films preserved only for those studying film? I couldn’t understand why huge audiences weren’t flocking to see these incredible works of art and celebrating this superlative form of cinema. I was incredulous at how I had managed to live my first three decades without exposure to silent film. The years I had wasted!

Finally, and in case there was any doubt remaining, lecturer Andrew Spicer closed the day by presenting what I have now come to know as one of the finest films ever made: Murnau’s magical silent masterpiece Sunrise: A Song of Two Humans (1927). I was utterly transfixed. It was one of those rare moments in life when you realise that everything had changed – and for me, cinema would never be the same.

My initiation continued with a series of documentary films I found on VHS videotape in the college library, produced by Kevin Brownlow and David Gill. I avidly watched each moment. They weaved the stories so well and in such a compelling manner that I was hooked. It seemed the deeper I ploughed into this magical world, the more gems there were to discover. I was introduced to late great megastars such as Lon Chaney, Charlie Chaplin, Douglas Fairbanks, Mary Pickford and Clara Bow, as well as great directors such as Griffith, Erich von Stroheim, Victor Sjöström and Clarence Brown. The list seemed endless, and the productions grew more and more impressive, grander and impactful.

Allan Dwan’s The Iron Mask (1929), Saturday 13 November 1999, Sadler’s Wells, London. Audience: 1,600. Live orchestra.
By 1999, I was a fully paid-up member of the silent film fan community, devoted to what I considered to be a much-maligned and mostly forgotten art form. I was determined to experience as many quality screenings of these films as I could and started taking regular trips to the National Film Theatre in London to watch seasons celebrating silent film directors. Each train journey from Bristol felt like a pilgrimage.

By now, I had started a fan group called Bristol Silents with my Film Studies tutor Norman Taylor. Our shared passion for the silent era was underpinned by a feeling that if audiences could experience these films at the right speeds, in excellent prints and with first-class live music, they would be just as enchanted as us.

So this became our mission. Our early Bristol Silents’ audiences were populated with passionate devotees and new converts to the art form. Before too long we accumulated 100 members and were holding regular screenings at Watershed, thanks to the sterling support of its programmer Mark Cosgrove, who shared our vision of building new audiences for silent films.

1999 saw yet another pilgrimage to London, to see a film starring Douglas Fairbanks, the follow-up to the hugely successful The Three Musketeers (1921). The Iron Mask (1929) was one of the productions that formed part of the Channel 4 Thames Silents series: great silent features presented in restored prints with newly commissioned scores, usually by Carl Davis. Brimming with enthusiasm, and with poster and souvenir programme under my arm, I noticed a crowd of people gathering in the foyer for a pre-event talk with Carl and film historian and restorer Kevin Brownlow. They were showing examples of their collaborative work but much to my disappointment, Kevin brought news that this event would be their last.

After more than a decade of funding restorations and investing in preserving and promoting silent cinema, Channel 4 was decommissioning the series, moving into new areas of television. The focus was shifting to a new show called Big Brother. It felt prophetic and poignant. Silent films’ unique art form was being pushed aside, once again, for the latest innovation in the medium of visual entertainment, this time the newly burgeoning medium of reality TV. My heart sank and I felt a palpable sense of loss. My first grand silent film experience with live orchestra was also to be the last! I took my seat, deflated. The Iron Mask saw Fairbanks kill off a character for the first time. I felt the painful parallel: Thames Silents coming to an end and Fairbanks in his last silent film, swash-buckling for his life and, right at the finish, stabbed in the back, betrayed. The emotion was overwhelming: Doug’s passion and determination on screen, Kevin and Carl’s off screen, and for me, roused as I was by the magnificent score, the realisation that this was my calling. I knew in that moment that I must devote my life to championing silent film. As I travelled back home to Bristol that night, I knew, with certainty, that I had to work in silent film and to present these films to new audiences, in the footsteps of Kevin and for the love of this ever-rich art form.

Abel Gance’s Napoleon (1927), Saturday 3 June 2000, Royal Festival Hall, London. Audience: 2,700. Live orchestra.
The following year I had the pleasure of being invited to Kevin’s home in London to discuss silent film, in response to my devoted ‘fan’ letter. In Kevin I immediately found a kindred spirit like no other. Kevin was encouraging of my enthusiasm and mentored me in my passion for silent film. Of notable significance, Kevin was also the person who introduced me to the film critic and historian David Robinson. Both Kevin and David became patrons of the growing Bristol Silents movement.

Sometime later, I was overjoyed to discover that Abel Gance’s Napoleon was being screened at the Royal Festival Hall in London with a newly revised, fuller version of Kevin’s restoration, which he had worked doggedly on for decades, adding an additional 20 minutes so it now had a running-time of five hours and 24 minutes. Full of anticipation, I entered the hall with my friend and fellow silent film buff Mark Fuller. I was utterly bowled over by the audience. In the bar I spotted actor-director Richard Attenborough with Monty Python’s Terry Jones. I didn’t know (and wouldn’t have believed) at that time, that they were destined to become patrons of Bristol Silents. I took my seat with film director Alan Parker behind me, actress Jean Boht in front of me, and Welsh actress Nerys Hughes to my right. It was difficult to believe I wasn’t dreaming.

If you haven’t seen Napoleon (which you must) it is difficult to describe the visceral impact of this exceptional and breath-taking work. Shot on location in France, Italy and Corsica, costs running into millions of francs, starring more than 40 principal characters, with some scenes employing up to 6,000 extras, it’s an epic sweep of history and audacious ‘poetry of action’, featuring Gance’s innovative legendary triptych experience, towards the end, where the screen expands into three shots, tripling its size.

Napoleon was, and still remains, the greatest cinematic experience of my life. For me it is the film masterpiece par excellence. I’ve had the privilege of watching the film live on three more occasions and the experience hasn’t diminished. The impact of my first screening back in 2000, however, served to consolidate my dedication to silent film; its innovation, importance and artistry were a cinema revelation.

As I reflect on these three pivotal days, I see these three films ignited a passion that fuelled decades of inspiration, commitment and work as a ‘champion of silent cinema’. The transformative power of this art form led to two special friendships with fellow passengers on this journey who became mentors and role-models, as well as life-long friends: David Robinson and Kevin Brownlow.

It has been a pleasure and a privilege to play a role (albeit a small one) in the renaissance and rediscovery of silent film spearheaded by Kevin in the 1960s. It has been my guiding light to keep attracting new generations to silent film and to keep the passion alive.

Chris Daniels is co-founder of Bristol Silents and Director of Slapstick Festival, which have reached over 125,000 people over more than 500 live events during the past two decades. Established in 2005, Slapstick Festival continues to attract huge audiences at each annual celebration of silent comedy in Bristol.

THIS ESSAY will be included IN OUR FILM2021 BOOK WHICH WE WILL BE PUBLISHING IN OCTOBER. THE BOOK IS FUNDED BY THE NATIONAL LOTTERY HERITAGE FUND. THE AUTHOR RETAINS COPYRIGHT AND TEXT CAN NOT BE USED BY OTHERS WITHOUT HIS PRIOR PERMISSION.