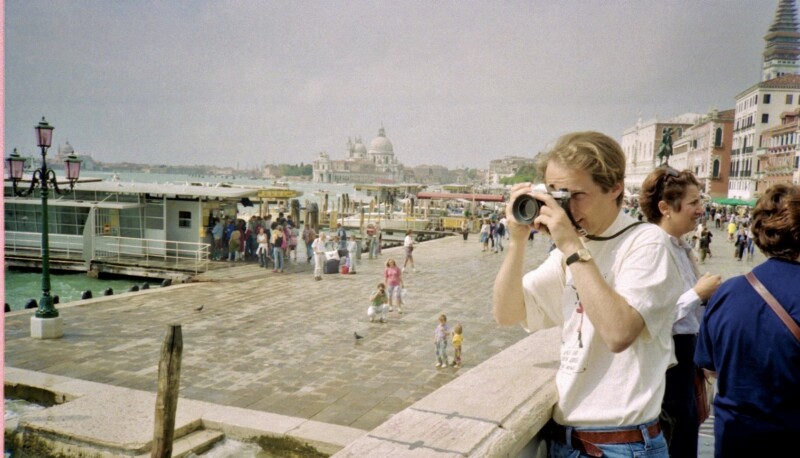 I must have felt it was going to be a particularly important event sometime before Nick Park and I set off to Venice in the first week of September 1993, because a few days beforehand I went out to buy a new jacket.

John Lewis supplied the necessary apparel, according to my diary, and no doubt at a good price, although that detail is omitted. My diary also notes that I was feeling quite nervous about the trip, as it was to be the first public screening of The Wrong Trousers at a major, international film festival. The film had only just been completed and the print was fresh from the laboratories, unseen.

There are times when sitting in a cinema can feel extra special. I recall my father taking me to see Kubrick’s 2001: A Space Odyssey in Cinerama in London when I must have been about 14. That huge screen, extraordinary images, incredible sound, made it a highly memorable occasion, even if, as a school-boy, I didn’t really understand what the film was all about. A few years earlier David Lean’s Lawrence of Arabia had the same impact on me, again defeating my narrative understanding, but registering as something exceptional. I don’t recall noticing the audience’s reaction for either of those films. It was just something I felt. The Venice experience would be rather different.

Nick and I arrived in the city from the airport on a waterbus, failing to see the hotel into which we had been booked, the Londra Palace, right in front of us. We walked in a circle of Venetian streets, with our bags, rather in the manner of Jacques Tati, before finding the hotel. We entered the five-star retreat no doubt looking very wide-eyed and innocent. Nick and I had both been to a few animation film festivals, but nothing as fancy and glamorous as the Venice International Film Festival, with its swish hotels and expensive drinks. We were a little disbelieving at first, especially as our film was just the cartoon short to support a full-blown live-action feature film. Our disbelief must have communicated itself because when we went to get our accreditation there was a certain hesitancy from security about whether to let us through to the inner sanctum. Clearly, we didn’t fit their image of respected, international film-makers, despite my new jacket, but we finally got through the cordon and were welcomed wholeheartedly by the Italian women staffing the desks. First stage complete, now for a bit of sightseeing, then a few drinks in preparation for the following day’s press screening.

The Wrong Trousers had been partnered with a film called Manhattan by Numbers, directed by the Iranian film-maker Amir Naderi not long after he had settled in New York. After a lazy breakfast we headed to the press screening room, a temporary cinema, as I recall, with the projector installed on a wooden platform. There were no introductions, no fanfare, just a bunch of film critics, probably hung-over from the night before, brandishing expressos and wondering what was in store for their morning cinematic experience. We were rather wondering the same. The Wrong Trousers was screened first, being the support film, and we were pleased to hear giggling and stifled guffaws from the hardened hacks who seemed to make up the bulk of those present. Nick and I looked at each other, pleasantly surprised by the reaction. There was a smattering of applause as the film ended. That was certainly good to hear.

Manhattan by Numbers soon started, and we settled back into our seats. At the first reel change-over something went wrong; the image was upside down and running backwards. Someone hadn’t checked the geometry of the print. Squinting behind me to look at the projector I realised it would take some time to unravel the problem. I looked at Nick. We swiftly agreed that neither of us had been gripped by the film so far and that we could do with a cup of good Italian coffee. We discretely got up and left the screening room to find a café. We noticed a number of others had the same idea. I don’t know whether Amir was in the audience but looking back at the situation I rather hoped he wasn’t. The public screening of the two films was the following afternoon so Nick and I relaxed by wandering around Venice and enjoying the atmosphere. It was all new to both of us.

September 4 1993, the Big Day, and we made our way to the Lido for the public screening, in the vast Pallazo del Cinema. But it was really Amir Naderi’s Big Day; we were just second fiddle to his feature debut. We found ourselves escorted through the palatial cinema by Amir’s entourage, behind the director, who the crowd were eager to see. What they thought of us, two young men, looking rather overwhelmed, following the man of the moment, I’ve no idea. The entourage, whilst courteous, were also not quite sure who we were.

We took our seats in the front row of the balcony sitting next to Amir, and wished him luck. The lights went down, and The Wrong Trousers came up. Very soon we heard laughter and it seemed to continue through much of the film. It was at this point that I realised that the film was something special. Here was a serious feature-film audience thoroughly enjoying 30 minutes of Wallace and Gromit, before the main feature for the evening started. Could it really be that the 18 months spent shooting the film was going to pay off after all? Before we knew it the credits began to roll, and to our amazement the audience rose and gave the film a standing ovation. Many turned to look up to the directors’ seats, clapping furiously. I turned to Nick gesturing for him to stand and take a bow. Nick, forever shunning the limelight, gently rose and acknowledged the applause. Amir turned to us, clapping enthusiastically. I suddenly felt very sorry for him, knowing that his film was unlikely to garner such a reception.

The applause died down, the lights dimmed, and Manhattan by Numbers wound its way smoothly through the projector this time. Unfortunately, the reels we hadn’t seen didn’t change our opinion of the film. Within 45 minutes a moderate proportion of the audience had left the auditorium. We knew we had to stay in our seats to the end and I spent much of the time wondering what to say to Amir once his film had finished. ‘Such a film!’ is a neat, neutral phrase in these circumstances, I’ve since learnt, but you have to follow it up with some positive comments. My diary doesn’t recall how I managed the situation as we left the cinema with Amir, but I know Nick and I were buzzing. A standing ovation, what more could you ask for? We all went for a celebratory dinner with the festival organisers, where Nick was toasted for making such a wonderful film.

They were right, of course, The Wrong Trousers is a wonderful film, and it was that night at Venice, after all the angst, sweat and tears shed in its creation, that proved it for me. A few months later the film earned Nick his second Academy Award. Again, I had gone out to buy a new jacket before we flew out, but this time it was a dinner jacket.

Listen to an audio recording of David Sproxton reading his essay at the SoundCloud link below.

David Sproxton co-founded Aardman with Peter Lord. He has overseen the development of the company from a two-man partnership to one of the pre-eminent animation houses in the industry. His most recent Aardman film credits are as Executive Producer on Nick Park’s animated comedy-adventure Early Man and A Shaun the Sheep Movie: Farmageddon. He stepped back from the role of Managing Director in 2019 and is now a trustee of the company, which is based in Bristol.