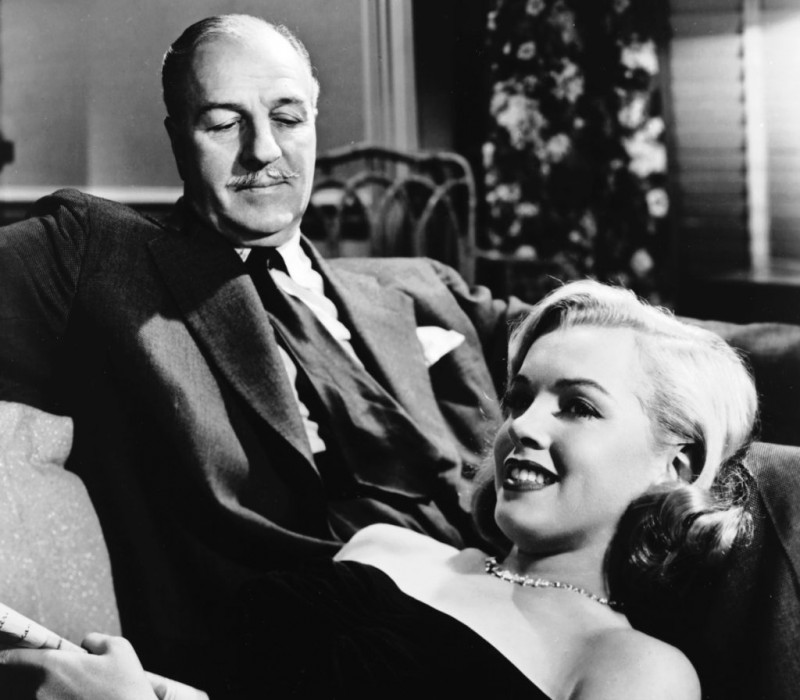 The second film in our 2019 film noir season was John Huston’s The Asphalt Jungle, one of cinema’s great heist movies. It was partly shot on location in Cincinnati.

Huston directed what is considered to be one of the first film noirs – an adaptation of Dashiell Hammett’s The Maltese Falcon that was released in 1941. That same year Raoul Walsh’s noirish High Sierra was brought to the screen with a script co-authored by Huston based on a novel by W R Burnett.

Huston was co-screenwriter as well as director of The Asphalt Jungle, again adapted from a novel by Burnett, who also wrote Little Caesar. Burnett is associated with the proletarian tradition in American fiction while Huston is known for the naturalism of much of his early work. Together they ensured that the noir elements in this film are grounded in a realistic depiction of workaday criminals and the hypocritical ‘respectable’ class with which they are entangled. The criminals are generally more sympathetically depicted than those on the side of the law. While we’re enjoying the thrill of watching the jewel robbery unfold, we want the gang to get away with their elaborate plan, to defy all the bad luck and betrayals, but fate has staked the odds against them.

The Asphalt Jungle was released through MGM though studio-founder Louis B Meyer is reported as saying: ‘That ‘Asphalt Pavement’ thing is full of nasty, ugly people doing nasty things. I wouldn’t walk across the room to see a thing like that.’ The film made a modest profit of $40,000, but was not considered a box-office success.

It has an exceptional cast. Sam Jaffe was nominated for an Academy Award for his playing of the soft-spoken criminal mastermind Doc who is looking for a last big score. Doc’s authority over his associates comes from his meticulous scheming and evident intelligence rather than from the use of physical force or flamboyant tirades.

Louis Calhern – an actor associated with patrician, upper-crust roles – is the corrupt lawyer who is the financial backer of the scheme. He is infatuated by his young mistress, played by relative newcomer Marilyn Monroe. When the film was re-released, Monroe was given a prominent position on the publicity poster as a reflection of her growing popularity. Her role is a small one in terms of screen time but highly significant in terms of plot and she considered it one of her best performances.

Sterling Hayden plays ‘the muscle’ needed to execute the plan. He’s a small-time crook with a clear sense of honour who is hoping to buy back the family horse farm in Kentucky. His would-be girlfriend is played by Jean Hagen, best known today for her brilliant comic performance as Lena Lamont in Singing in the Rain (1952).

This was Hayden’s first major starring role. He is an interesting actor who made an impact in two films directed by Stanley Kubrick: as a gang-leader in The Killing (1956), another film noir about a heist that goes wrong, and as a deranged general in Dr Strangelove (1964). He is also remembered for playing a brutal police chief in Francis Ford Coppola’s The Godfather (1972) and a raging, alcoholic novelist deceived by his wife in Robert Altman’s neo-noir The Long Goodbye (1973), an updating of a Raymond Chandler novel.

Hayden dropped out of school to become a fisherman, captaining his first vessel by the age of 22. After the Second World War – in which he served as a commando in the Office of Strategic Services – he alternated acting work (which he despised) with time at sea. Inspired by the Yugoslav partisans with whom he was based during the war, he was briefly a member of the Communist Party. He joined the Hollywood Committee for the First Amendment – which had been co-founded by Huston – and the two are thought to have first met in Washington DC at a protest against the blacklist. However, Hayden went on to name names in testimony to the House UnAmerican Activities Committee, something he would later come to regret. He considered his betrayal as ‘ratting’.

John Huston was part of a significant Hollywood dynasty. His father Walter was a highly regarded actor on stage and screen who won an Academy Award as Best Supporting Actor for his performance in Huston’s The Treasure of Sierra Madre (1948). His daughter Anjelica won an Academy Award for her performance in Huston’s Prizzi’s Honour (1985). John Huston’s sons Danny and Tony and grandson Jack are also in the business.

John Huston was an impressive actor as well as an award-winning director. Among his best film roles was that of the villainous Noah Cross in Roman Polanski’s neo-noir Chinatown (1974).

Huston died in 1987. In 1989 his heirs made an unsuccessful attempt to prevent a colourised version of The Asphalt Jungle from being broadcast on French television. They lost the case but a few years later the appeals court reversed the ruling and fined Turner Entertainment Ltd 400,000 francs. The court said colourisation transformed the original artwork enough to potentially transgress the artist’s moral rights.

Header photo: PUblicity still froM The Asphalt Jungle, courtesy of Park Circus/Warner Bros AND USED WITH THEIR PERMISSION IN THE PROMOTION OF CITY FILMS PROGRAMME.