Orwell and the Dystopians Dorian Lynskey 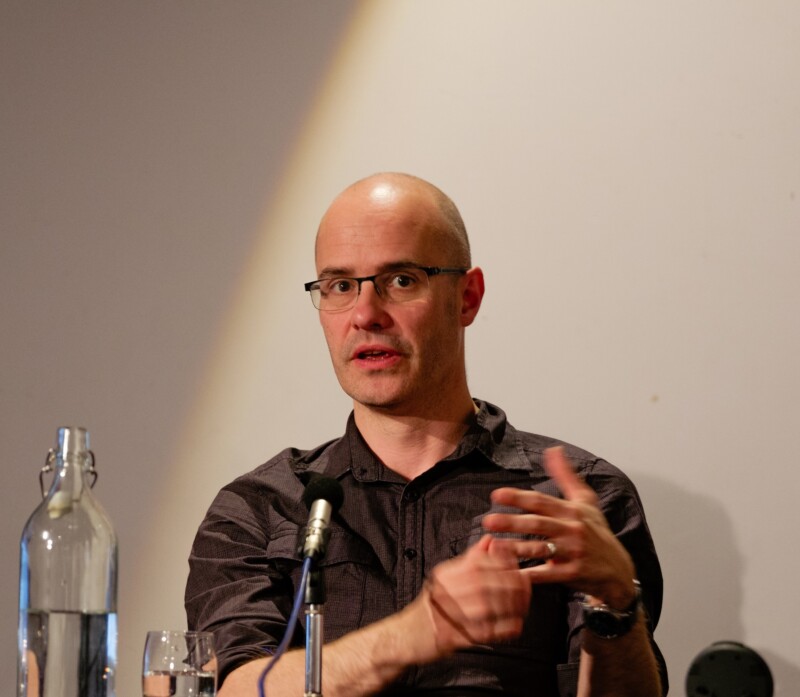 We are not far away from the centenary of one of the most remarkable books of the early twentieth century: Yevgeny Zamyatin’s dystopian novel We.

Well, in a manner of speaking. It’s hard to say exactly when the novel’s centenary should be. We know that Zamyatin finished writing it in 1921, during the Russian civil war, but Lenin’s Bolshevik regime deemed it politically unacceptable so it didn’t see print, in English, until 1924. For writing a satire on totalitarianism several years before totalitarianism actually existed, and for voicing defiantly heretical views about the new regime, Zamyatin was steadily ostracised and demonised until, in 1929, he asked Stalin to grant him permission to leave Russia, spending his final years in exile in France. We was first published in his homeland in 1988, 51 years after his death.

We is an extraordinary book by an extraordinary character but it’s best-known now for its hotly contested relationship with other, more famous books about an oppressive future. Several people, starting with the critic Isaac Deutscher in 1955, have accused George Orwell of plagiarising its plot, characters and themes in Nineteen Eighty-Four. Orwell himself suspected that Aldous Huxley had plagiarised We in Brave New World. Ayn Rand’s debut novella Anthem resembled We in ways that would seem beyond coincidence, but Rand never mentioned Zamyatin and even tried to turn the tables by suggesting that Orwell had plagiarised Anthem. Zamyatin only lived long enough to be able to comment on the Huxley connection, saying graciously that the similarities proved only that ‘these ideas are in the stormy air we breathe’.

Readers are fascinated by the sin of plagiarism because there’s something riveting about the idea that a hugely successful author is merely a petty thief while the real genius is a neglected visionary who never got his due. Certainly, the basic premise of We is recognisable from later works. Set in the distant future, it describes an ultra-conformist One State, ruled by a mysterious dictator called The Benefactor according to the rules of mathematics. Its citizens live under constant surveillance by the secret police, unable to exercise freedom of thought or speech. The novel’s protagonist, D-530, is a bland, dutiful state employee who questions nothing until he begins an affair with an alluring dissident who belongs to an underground resistance movement, only to end up humbled and brainwashed, loyal once more. We know that Orwell read (and wrote about) We between having the idea for Nineteen Eighty-Four and starting to write it, so Zamyatin’s example was probably useful, though not essential.

Zamyatin, however, openly acknowledged his debt to the great HG Wells, especially his 1899 book When the Sleeper Wakes, which was arguably the first significant dystopian novel. Orwell and Huxley also knew Wells’ work intimately and took swipes at him in their own books. So were all of them actually plagiarising Wells? The whole project of pinning down who took ideas from whom starts to feel ridiculous because these books have such different agendas and their differences are far more important than their similarities.

Orwell described We as ‘an interesting link in the chain of Utopia books’. Another way of picturing the evolution of the dystopian novel is to imagine a bag. It starts to accumulate ideas in the 1890s, during an intense publishing craze for tales of futuristic societies, most of which are destined to be forgotten. HG Wells comes along, fresh from the enormous success of books such as The War of the Worlds, and moulds some of these half-ideas into a mechanised, hierarchical mega-city controlled by propaganda and surveillance. Jack London, in his 1908 novel The Iron Heel, offers a brutal, proto-fascist version of a world gone wrong. Zamyatin builds Wells’ city into something more scientific, more communist, more Russian. Huxley instead introduces jokes and a tyranny of pleasure. Then, 50 years after When the Sleeper Wakes, Orwell combines elements of all of these books and more into Airstrip One but brings the perspective of someone who has studied real-life totalitarianism and lived through the Second World War and its aftermath. None of these future states are identical but they all overlap in various ways. Now dystopian literature’s bag of ideas is really filling up and it’s no longer clear where each one originated.

A prime example of this process is the famous 1984 television advertisement for the Apple Mac, which one of the creative team described as ‘a B-grade interpretation of Orwell’s book’. In fact, it’s more like a 1980s megamix of dystopian tropes. A big ranting face on a TV screen? Check. Lobotomised drones in overalls? Check. Grey industrial landscape? Check. A courageous, solitary rebel? Check. Orwell was the selling point on account of the date but director Ridley Scott’s key visual inspiration was actually the 1936 movie Things to Come, written by HG Wells. The advert isn’t so much Nineteen Eighty-Four as a foggy collective memory of Nineteen Eighty-Four and other works in the same genre.

More recently, The Lego Movie plundered the same bag of ideas, paying particular attention to We, to conjure up a dystopian society that would resonate with kids. Once again we have the everyman, the female rebel, the dictator, the regimented society, the underground movement, the propaganda song and the stigmatisation of individuality, now so familiar that we don’t even ask where they came from. If this is plagiarism, then who exactly is it plagiarising?

During the 70 years since Nineteen Eighty-Four’s publication, the movement of ideas in the dystopian genre has become so complicated that we’ve outgrown the assumption that this writer must have plagiarised that writer and we’ve come around to Zamyatin’s relaxed suggestion that different people can often end up thinking along the same lines. Writers may play with the same set of basic tropes, as if they were a set of Lego blocks, but the important thing is how a specific person, in a specific place, at a specific time in history, uses them. Is the target fascism, communism or capitalism? Does the regime subdue the populace with pain or with pleasure? Is the city shiny and flawless or grimy and bleak? Does it exist in the far-flung future or a nightmare version of the present? Does the rebellion bring down the tyrant or is it doomed to fail? And who is telling the story?

Margaret Atwood has said that Orwell’s novel was ‘a direct model for me’ when she began writing The Handmaid’s Tale. Given that she started work in 1984, how could it not have been on her mind? Her novel’s appendix is a candid homage to Orwell’s appendix, ‘The Principles of Newspeak’, and his influence is detectable throughout the book: the passive, complicit protagonist, the secret resistance, the crippling uncertainty about what is true and what is just propaganda, the satirical use of real-world horrors rather than sci-fi prophecies, in order to say, ‘It could happen here’. Atwood didn’t attempt to bury any of her debts to the author who blew her mind when she was a teenager in post-war Canada.

But nobody reading the book, or watching the hit TV show, or reading this year’s Booker Prize-winning sequel The Testaments, thinks that Atwood is merely ripping off Orwell because her perspective is so fresh. ‘The majority of dystopias — Orwell’s included — have been written by men, and the point of view has been male,’ she once wrote. ‘I wanted to try a dystopia from the female point of view — the world according to Julia, as it were.’ Her deep knowledge of her predecessors inspired her to challenge rather than copy them. A visitor to theocratic Gilead from Airstrip One might recognise some common facts of life but one state was created by a man in the 1940s and the other by a woman in the 1980s, and the political arguments embedded in these societies are inevitably very different. Now there is a publishing trend for dystopias written by women, and they owe far more to Atwood than to Orwell. The bag of ideas gets fuller.

You can tell from his 2013 bestseller The Circle that Dave Eggers is well-versed in many of the same writers as Atwood but his ideological fanatics are Silicon Valley utopians who want to render privacy an antisocial thoughtcrime and remake the world as a kind of consumerist police state where citizens share every aspect of their lives for their own good. Eggers updates and expands ideas from Orwell, Huxley, Zamyatin and Wells for the era of Big Tech in a bitingly satirical novel that feels both familiar and urgently new. In fact, the familiar highlights the new. Every time you spot a knowing nod to one of those older dystopias, you’re prompted to think about what has and hasn’t changed about society, power and control over the decades.

Actual plagiarists steal what they cannot imagine but nobody could accuse the writers I’ve mentioned of lacking their own distinctive visions of the world and what is wrong with it. They give at least as much as they take. Dystopian literature seems to me like a multi-generational collaborative project: a conversation that rolls on for decades, powered by a passionate desire to disagree, or to fill in the gaps, or to satirise a world that earlier writers could not have foreseen. Dystopian writers don’t try to ignore their predecessors but to engage with them. Pure originality is not the goal. Unless we somehow manage one day to resolve fundamental conflicts in society and human nature forever more, future generations of writers will continue to breathe that same stormy air.

Photo: DOrian LYnskey at the Festival of the Future City 2019 (Evan Dawson).

THIS ARTICLE WAS FIRST PUBLISHED IN 2019 AS PART OF OUR PROJECT MARKING THE 70TH ANNIVERSARY OF THE PUBLICATION OF GEORGE ORWELL’S NOVEL NINETEEN EIGHTY-FOUR.