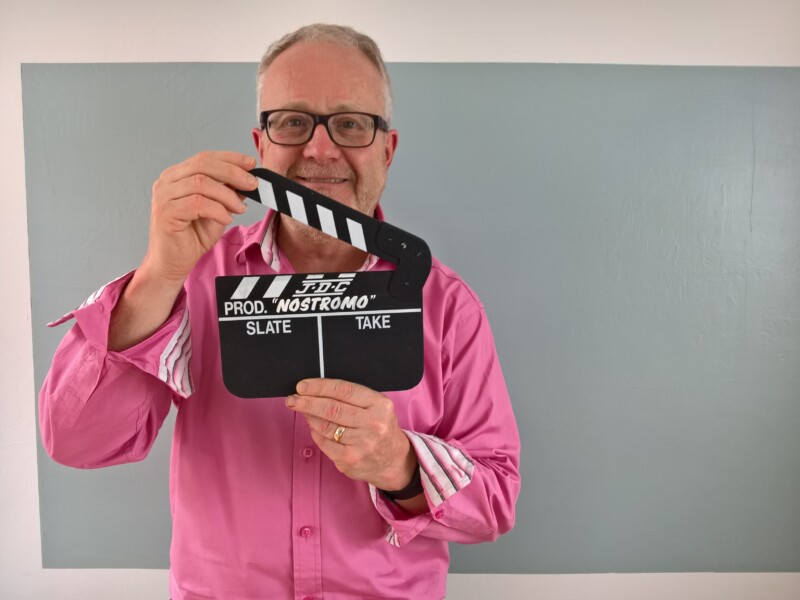 I can’t recall the first film I saw but I remember where I saw it.

We were on holiday in Conwy in Wales where we stayed in a caravan every year. I have few fond memories of caravan holidays, but I liked Conwy. Its castle and beach, harbour, and nice high street made it a good place to explore. And it had a cinema, which we were desperate to visit.

One day, Dad – no doubt fed up with the seven of us in such cramped conditions – said that we could go to the pictures and gave us the money. He warned me that we may need to get someone to take us in as young children without adults were not welcome. We waited at the entrance and a kind lady offered to help. It was the Palace Cinema, and a palace of dreams it was: 750 seats in one big auditorium. My experience that day led to a lifetime of joy.

Despite the cinema being my first love, it took a while for me to be a regular goer. There were no cinemas where we lived. There was the ABC in Wolverhampton, but this was a bus journey away and my pocket money was limited. My early film experiences were thanks to television (and well before video recorders, DVDs and streaming). You took what you were given and there was a lot. I loved Laurel and Hardy. I watched as many Bogart films as I could, even one miserable night in the caravan when, after days of never-ending rain (our holidays seemed full of rain), we rigged up a portable television to a car battery. Not a perfect screen image, but it was still Bogie. I loved musicals, too.

At the age of 11, staying at my elder brother’s house, I was told to watch All Quiet on the Western Front. I was captivated and horrified. This film had such an impact on me that some years later I searched the archives of the world for details of its production and reception; went to California twice to interview people who had appeared in it; and wrote a book, Filming All Quiet on the Western Front, and another, Cinema and the Great War. I didn’t know then that what I had seen was a much-cut version of the film; it was some decades before the full reconstruction was released (and a triumph it is).

Dissolve to teenage years. I remember seeing Star Wars at the cinema, but no other visits, though there must have been some. At school, an annual ‘treat’ was watching Kes. My film education continued to be provided by television and still is with the remarkable Talking Pictures channel. I hated domestic science on Thursday mornings so would feign illness. Wrapped in a blanket, with a supply of bourbon biscuits, I watched a series of old films on ITV. I remember seeing The Big Parade and The Iron Horse (both classics – though I didn’t know that at the time). I remember seeing the full ‘Lullaby of Broadway’ sequence from Gold Diggers of 1935. And I saw Things to Come. Things to Come was mad, but also ‘Wondrous!’ and ‘A Mighty Challenge to the World of Today!’ as the posters said. The early attack on Everytown was a tremendous piece of cinema and the new peaceful city – another Everytown – created after decades of conflict was a science fiction tour de force (though even then I wondered why anyone would want to live underground). I’d been captivated by the moon landing a few years before, and the space rocket at the end was from my dreams, though a tad over the top, as was the dialogue generally. H G Wells had written this, and it showed. At one point, set in the then future of 1970 (not many years before I watched this for the first time), Raymond Massey declares that the ‘Brotherhood of efficiency, the free masonry of Science’ now rules and helps overthrow the dictator. Portentous but wonderful.

By the time I got to university and then entered – for a short while – teaching, the cinema was my world. The Little Theatre and the huge IMAX screen at the National Museum of Photography, Film and Television in Bradford provided latest releases and classics. I won a competition for free entry to all Bradford’s cinemas for a year and saw at least 200 films. But the television was still important and no more so than for my first viewing of Citizen Kane. One year over Christmas, BBC2 had a Welles season. Citizen Kane was on Christmas Day when I would be with my parents. There was video, but could I trust my programming skills and what would happen if there was a power cut? The solution was simple if cumbersome: I got two friends to record it; I recorded it at my parents; and there was also my copy at home in Bradford as back up. In the end I got four copies; and I watched it on transmission. Now you can download Kane with a couple of clicks.

I graduated with two degrees in Peace Studies at Bradford and worked there for a short while. My attention had moved from my subject – the non-nuclear balance of forces between NATO and the Warsaw Pact – to movies and war and peace (which led to my first two books). To pay the bills, I took a short-term job with Cambridge City Council to investigate the impact of a nuclear attack on Norwich, Peterborough, and Cambridge. They gave me a rudimentary Amstrad computer, and a programme to predict levels of attack and their impact. It took at least five hours to come up with the results. What else to do while waiting but go to the cinema. There was a multiplex nearby. I started a weekly double-bill treat – often with me being the only person in screenings – which lasted six months. By the way, when I got back the first time the results were clear: I had to tell the council that no one would be left alive (there’s a movie in that).

Bringing destruction to the people of East Anglia was meant to buy me some time as I wasn’t sure what to do. I looked briefly into a career in film – first, as director of the Bradford Film Theatre (no); then as a film critic (too few jobs); and then as an academic, which was a dispiriting experience. I tried to read the film theory books; I really did. All they left me with was a sadness that something that had brought such joy to millions, was the artform of the twentieth century, should be eviscerated like a poor laboratory animal and written up in terms that, fortunately, few would want to read. I chose another career, though this hasn’t stopped me programming film seasons, setting up film festivals, and – most important of all – seeing movies as such an integral part of the work that I do that I can legitimately call this research. In 2021 we were finally able to do the project I had wanted to do since 1993 on William Friese-Greene, of which this book is part.

I’ve always liked this from the novelist Elizabeth Bowen about why she goes to the cinema (written in 1938): ‘I go to be distracted (or “taken out of myself”)’, she says. ‘I go when I don’t want to think; I go when I do want to think and need stimulus; I go to see pretty people; I go when I want to see life ginned up, charged with unlikely energy; I go to laugh. . .’. She adds:

‘I go to be harrowed; I go when a day has been such a mess of detail that I am glad to see even the most arbitrary, the most preposterous, pattern emerge; I go because I like bright light, abrupt shadow, speed; I go to see America, France, Russia; I go because I like wisecracks and slick behaviour; I go because the screen is an oblong opening into the world of fantasy for me. . . I go because I like sitting in a packed crowd in the dark, among hundreds riveted on the same thing. . ..’

I go for all these reasons, too. But I also go because I believe watching movies has taught me many lessons about the meaning of life (and of the work I want to do) and by continuing to go I can learn even more. The Magnificent Ambersons about America, wealth, business and the growth of cities; All That Heaven Allows and Magnificent Obsession about love; Une Partie de Campagne about following your life’s desires when you can and avoiding regrets later; The Way to the Stars about wartime sacrifice and post-war hope; Ikiru about making things matter even when you face death; Casablanca about ideas and opposing Fascism; Frankenstein about hubris and helping the underdog (was it this – and not the song ‘Nelly the Elephant’ – that led me to my lifetime work campaigning for the rights of animals?); The Day the Earth Caught Fire about nuclear war and, now, climate disaster; Singin’ in the Rain about joy; The Day the Earth Stood Still about peace; those three great films about World War One which taught me how appalling that war was – All Quiet on the Western Front, La Grande Illusion and Paths of Glory; and The Way Ahead about coming together to defeat an enemy.

I could have mentioned many more. What we each take from the films we love is different; but watching films does offer a way to reflect on what to do with your life, about the ideas that guide you, about making your mind up; about love and loss; life and death; about meaning.

What’s next? Simply more of the same. I turned 60 last year. By July 2021 I hadn’t been to the cinema for over 16 months due to the pandemic. The first two films I saw on my return, Nomadland and Summer of Soul, reminded me why I love the cinema. Now that there are more years behind me than ahead, I don’t want to waste time. Every year alive after the age of 60 is more precious than ever. My cinema-going and film-watching days are not over.

And the end when it comes – the final fade out? I don’t believe in heaven (I believe more in Heaven’s Gate – which I still regard as a masterpiece). But if life after death exists, I’d like to travel there on the stairway to the other world that transported David Niven and Kim Hunter in A Matter of Life and Death or with Georges Guétary on the stairway to paradise he builds in An American in Paris. At the top I’d see another palace of dreams – much like the first one I entered many decades before. There’s an old-fashioned commissionaire, bright lights, a red carpet, and a sign saying, ‘Now on: La Ronde, Ikiru, The Life and Death of Colonel Blimp, All That Heaven Allows, Magnificent Obsession, Casablanca, The Music Box, Une Partie de Campagne, Letter From an Unknown Woman, Gold Diggers of 1935, Sunrise, A Canterbury Tale, The Way to the Stars’ – all for me. My heaven.

Andrew Kelly is the director of Bristol Ideas. He has published books on cinema and the First World War, Lewis Milestone’s All Quiet on the Western Front, legible cities and managing creative partnerships, among other topics.

Audio Recording
Listen to an audio recording of Andrew Kelly reading his essay at the SoundCloud link below.