Into the Spider-Verse Nikesh Shukla 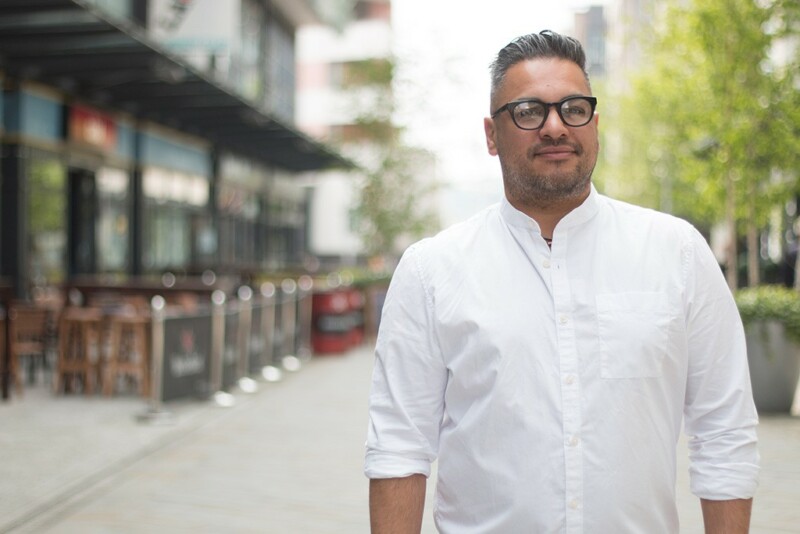 There is a bench on a hill overlooking the sea somewhere in East Devon.

It is in a car park and because of the hedge that acts as a border between you and the sea breeze, you can sit and bathe in the sun and feel a gentle wind on your flesh and feel truly happy. You feel untroubled by the world. You feel so far away from your problems, deadlines, opinions that need to be publicly had in real time and the horror of the news, unfolding every second. You feel miles away from the phrase ‘the cruelty is the point’.

This is the bench I sit on when I want to centre myself and feel my steadiness return, my resolve recharge, and most importantly, my mind rest happily.

Good art evokes this bench for me. I watch stuff and I read stuff and I listen to stuff that’ll move me, make me feel something. And the best stuff puts me here, on this bench.

It had been years since anything I’d read or seen or heard put me on this bench. And then came Spider-Man: Into the Spider-Verse.

A fourth attempt at a Spider-Man, and somehow, the best one, because of the joy it evokes for me. With respect to Tobey Maguire, but your black suit jazz-dancing in Spider-Man 3 was enough for me to erase any good your moment in the franchise held. And with respect to Andrew Garfield, I didn’t sign up for sad-sack Spider-Man. Now, Tom Holland, he’s my guy. He brings out everything I love about Spider-Man. He is the very epitome of the comic-book character I have been reading since I was about ten or so. He’s small and wracked with guilt and nervous and funny and sweet-hearted and only wants to do good and when he puts on the mask, he gets to be the very best version of himself.

I was happy with Holland. I didn’t need a new Spidey. But Miles Morales? Oh man, I had to see that.

There’s a perniciousness in the comic-book world when a character is introduced and they aren’t white or male. The comic-book fan-guy reaction is ‘oh, look, diversity is being forced upon us’. Before they’ve even read the damn funny-book.

Miles Morales entered the Ultimate Spider-Verse (not the Volume 1 696 one) in Ultimate Fallout #4 following the death of Peter Parker’s Spider-Man. The 13-year-old biracial teenage son of a Black American father and a Puerto Rican mother, he was classic Spider-Man fodder: a lost teenager trying to do the right thing by his parents’ expectations of him, while trying to do the right thing by the world and their expectations of people with his kinds of powers. He was sweeter than Parker, more lost, more humble. While he had moments of arrogance and spikiness, he was definitely quieter.

So, when that Spider-Verse trailer dropped, I had two very visceral reactions: I was both elated to be a part of the MCU (Morales Cinematic Universe) and tired of having to sit through another Spider-Man, especially seeing as we’d finally just got a good one.

Either way, I was there the day it opened.

I like going to the cinema in the morning. No one else is there except for me and two other weirdos. It feels like the closest I’ll ever have to a private screening. It’s quiet and serene. Much as cinema-going is a communal experience, there’s something much more focused about seeing a flick by yourself at a time when people with sensible jobs are doing said jobs sensibly.

Me, in the centre of the cinema, almost alone. That is how I like to watch things.

One of the most defining things about the way Into the Spider-Verse is shot is that it wants you to see what’s on screen as a construct. As the screen glitches us through various multiverse iterations, as we watch Miles rush through scenes, we see the pixels, we see the block squares that comprise the animation. The film-makers want us to see beneath the frames and see how it all comes together. Because for the multiverse to exist in the films is for us to accept that we are in that same multiverse. We are one portal away from a world with superheroes forged from the bones of the ordinary among us.

I went to a private school. I’ve written about this a bit. It’s not a secret. It’s something that grosses me out over two decades later and something that fuels me to use the privilege I had then for good now. It’s the only way to acknowledge the start you were given. Like a lot of kids of immigrant parents, I went to school because I was to be one of the first in the family to go to university and a lot of parents felt that a good university could be easier accessed through a private school. Now, of course, my parents made the choice to send me there, and that choice was based on them being able to make it a choice. And as the years went on, and they increasingly couldn’t afford it, I became the return-on-investment kid, even long after I left that school. It affected the choices I made for sixth form, for university, for the year after uni. I had to make back that money. I felt that responsibility.

In this way, I am Miles Morales and the guilt he feels about making good on his parents’ decisions in sending him to Brooklyn Visions in Spider-Verse, it got me in those first few minutes. I was weeping at his home life, the separation from his school life, how he wore different masks. At home, everything was fine, and at school, he was the cool guy, sort of. And in between those, with his best friend, he was him.

I was smiling and crying all by myself in the dark.

The way the film brings to the fore themes of ‘what could have been’ being irrelevant compared to what we choose to do in the moment is canon in Western literature. We teach in creative writing about agency. About choice. About how the characters’ decisions to better themselves take them through the plot until they self-actualise.

What Spider-Verse does is something more interesting. It lends itself to the mysticism of stories not formed in the West. It allows the universe to intervene in the life of a boy who needs some help becoming the person he needs to be. That radioactive spider could have bitten any New Yorker, even Uncle Aaron. But the story tells us that it could only bite Miles Morales. In the midst of coincidence and wonder, there is the grand design of everything around us. It all makes sense. Only he could be Spider-Man. Just as the second Peter Parker (Peter B Parker), and Spider-Ham, and Spider-Gwen, and Peni Parker were chosen by something bigger than themselves to become something for us all to aspire to.

Into the Spider-Verse is ultimately a film about resilience. No matter what life has thrown at each iteration of Spider-Man, whether it’s the realisation that your uncle is the Kingpin’s henchman, or Mary-Jane dumped you and your life fell apart, or you’re incredibly sensitive about people pointing out that you’re a pig, being a hero is using that adversity and spinning it into heroism.

The movie runs fast. There isn’t a second to catch your breath. From the moment Miles meets Peter B Parker at the grave of Peter Parker, we move with the quickness. It has the feel of a comic-book. Each panel is teeming with life. Each frame is bursting with action. Each scene is a combination of comedy and tragedy.

As soon as the credits rolled over Miles taking his first dive as Spider-Man, in his new black suit, I had a moment where I was sitting on a bench, looking out to sea. It was one of those perfect summer days where the blue of the sea and the blue of the sky blur into one. The horizon is a hazy portal. And I felt untroubled by the world. I felt a joy in my heart. I haven’t felt like this in years. Every time I have watched a person of colour on the screen, or read about them in a book, the weight of the oppression against them has loomed large. Systemic, structural, institutional racism and classism, social inequality, all of it. In every story. And that is the truth of the world, yes. But in Spider-Verse, there was room for a young boy of colour to take his time, breathe deeply and jump into the unknown, to see what it means to be a hero. It was beautiful.

Nikesh Shukla is a writer of fiction and YA. Most recently, his memoir, Brown Baby: A Memoir of Race, Family And Home, came out early 2021. He is the editor of the award-winning bestselling essay collection The Good Immigrant.