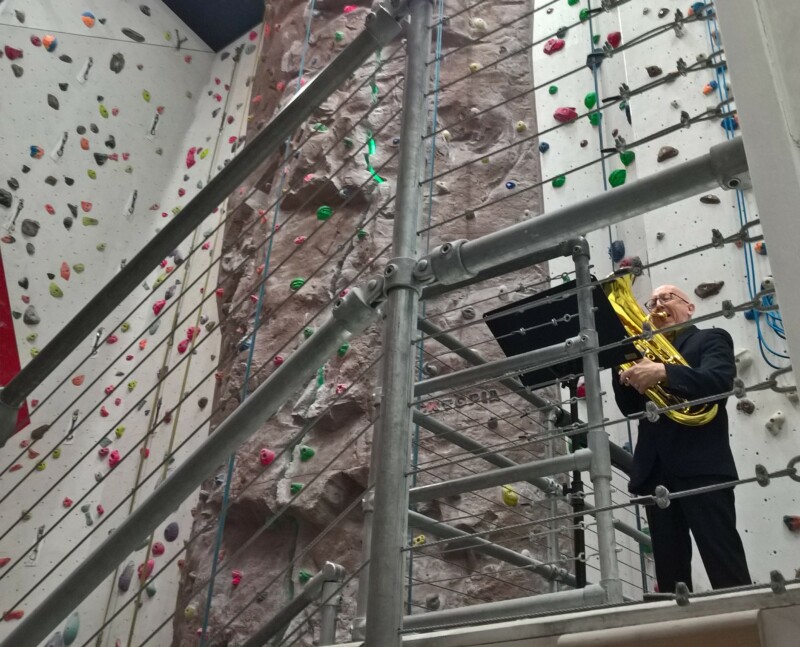 During the last few months, I and my colleague Mark Vasey have had the privilege of discovering some of Bristol's venues that used to be cinemas.

It has been a fascinating journey involving clambering over wallpaper rolls in the half dark to discover the remnants of a beautiful ceiling (soon to be turned into flats), crouching down to record in original corridors, and looking up and around to find – if you look very closely – the original interior of a cinema past, as is the case at the fabulous Redpoint Climbing Centre [Ambassador/Odeon Bedminster 1936-1961] where our evening performance of Ghost Cinemas took place on 16 October 2021. We came across St George’s Hall pub in Redfield – recently closed – where there is a whole cinema [St George’s Hall Electric Palace / St George’s Picture House / Granada Cinema 1912-1961] tucked away behind the pub (which itself was housed in the original foyer), complete with original seats and projector equipment. There’s a campaign to save it: Save Redfield Cinema.

Many people we met at the venues knew of their history as a cinema; some didn’t but all were fascinated. Since we started on the project I’ve heard of at least one old cinema due to be torn down.

I have been privileged to speak to members of the Bristol community who have given a wonderful insight into what cinema-going meant to them – much of this with thanks to Ruth Myers at Local Learning.

When we set out, it wasn’t necessarily an intention to document a little piece of social history but this is what happened – putting together personal pictures of people for whom cinema was an incredibly important part of their lives and dating right back to the 1930s. From being pelted by orange peel from the balcony above and someone coming down the aisles with a fumigator/scent spray to the queues to get in which snaked right around the corner. Men rushing across to the local pub in the interval to buy pig’s trotters for their wives and girlfriends; Saturday children’s cinema, serial shows, Cowboys and Indians; children letting their mates in by the side door . . . it was a wonderful insight.

As Margaret from Local Learning said: ‘Going to the ‘pictures’ as we called the cinema, brought the stories to life. We had no television then and the average household didn’t own a TV until the late fifties and it was only a very small black-and-white screen so going to the cinema was quite exciting as by then the pictures were in colour!’

Just like a movie we had a production team. This project couldn’t have been created without some fabulous people around me – not least of all Mark Vasey, the inventor of the Wurley Bird which ‘recorded’ the sounds of these old cinemas, right from the venues themselves. My thanks go to the people and venues who let us visit and record [credits below].

Mark explains that the Wurley Bird ‘is designed to be used in conjunction with a synthesizer. At the end of the Wurley Bird’s limbs are sensors. These sensors can see light. The synthesiser is used to feed the Wurley Bird with a control voltage, which these sensors will then alter depending on how much light they can see. The resulting voltage is then plugged into and used to control certain parameters of the synth. Depending on how you use the Wurley Bird’s output, you can create quite sci-fi sounds, spooky melodies or, in the case of the ghost cinemas, we’ve been playing recordings that we have collected during our research through the synth then allowing the Wurley Bird to use the environments it is in to shape the quality of the sound.’

Ghost Cinemas evolved organically from an initial idea, shaped by research, road trips, visits, conversations, community and collaboration. The final piece of music of around 12 minutes is written for electronic soundscapes created by Mark from the Wurley Bird recordings combined with original music by myself, played by international euphonium virtuoso Steven Mead, poems and narration by Ron Brooks, and voice and harmonium performed by Dildar Singh, who also contributed Bollywood melodies.

It is in three sections and earlier in the day was performed as a pop-up at the Van Dyck Forum [Vandyck Picture House/ABC Fishponds 1926-1996] and Co-op Ashley Down [Premier Cinema Theatre 1914-1964]. For our sell-out evening performance at Redpoint Bristol, we were also joined by two climbing instructors, Imralis and Nick. Imralis opened the show with one of his own songs specially written for the occasion – a beautiful modern-day reflection on cinema going – and Nick closed the evening with a folk song which I set to words by Ron – ‘Have courage, reach for the stars’.

We move back in time to the 1940s/50s when films were shown repetitively on a loop. You hear the Wurley Bird sounds of His Majesty’s / Concord (1911-1990, now RJ Wholesale), Eastville Hippodrome (1913-1959, now BS5 Flooring), St Georges Hall (Wetherspoons pub now closed, 1912-1961), Magnet (1914-1937, now C W Duke) and Ambassador/Odeon Bedminster cinemas through the lens of an original 1925 Wurlitzer organ recorded at Byron Jones ‘The Welsh Wizard’ house here in Bristol. Imagine if these old cinemas – The People’s Palaces – could talk now. . . their musical story is shared in conversation with Steven Mead on the euphonium.

We move on to the 1960s/70s with original Bollywood melodies by Dildar Singh. It’s Sunday and a Bollywood Film Show warm-up, with cinema-going a hugely important part of the Asian community in Bristol. The music features Dildar on voice and harmonium, accompanied by Steven Mead on euphonium, reminiscent of the old films whirring round and round.

Section 3: Songs from the Cinemas

This is a celebration and reflection on the social camaraderie of cinema-going – and how decades later this legacy lives on in places like Redpoint Climbing Centre. It features poetry and narration by Ron Brooks. We met Ron through Local Learning and he has become an integral part of our Ghost Cinemas project. Passionate about the cinema, Ron has specially written evocative poems about his experiences and memories. We learnt that he had his first date with his wife Jeannette at the Cabot Cinema in Gloucester Road 64 years ago. They celebrated their Diamond wedding anniversary this year and received a card from the queen. There is also a special ‘chocolate’ soundscape created by Mark from sounds recorded at Redpoint Bristol and at the end the voice of a 95-year-old lady who regularly visited the Ambassador in the 1940s.

1. The Cabot Cinema confrontation: 1945
Why are we all waiting out here in the cold?
My four children are all frozen, one just four years old
How can you be so callous and so very cruel?
Giving priority to Italian Prisoners of War.
It’s Government instructions, the Manager replied
Each prisoner must be counted and secured safe inside.

3. The Cabot Cinema first date: November 1957
We chose the Cabot cinema for our very first date
You were waiting for me at your Charfield Road gate
The perfect location for a young lovers’ tryst
In that darkened back row, we had our first kiss
Sixty-four years later, I reflect on the scene
You wanted an Easter wedding, every young lady’s dream
I wanted the tax rebate, a reasonable request
The Queen’s Diamond wedding card, the perfect bequest

4. Have courage, reach for the stars
Never underestimate the power of the cinema
The pleasures it gave to our everyday lives
The pictures, the Movies, whatever it’s called
Those dreams gave us comfort, like sheep in a fold.
So reach for the stars, achieve untold heights
At Redpoint camaraderie, adventurous delights.

Ghost Cinemas has been immersive and enjoyable, sparking interest and animated conversation wherever I go. There is already interest from two other local potential partners to develop and expand the project which I look forward to following up. I would also love to explore the concept nationwide – it certainly has the potential to capture the hearts of UK cinema-loving audiences.

Huge thanks to Bristol Ideas who commissioned me to create Ghost Cinemas, supported by the National Heritage Lottery Fund as part of Film2021.