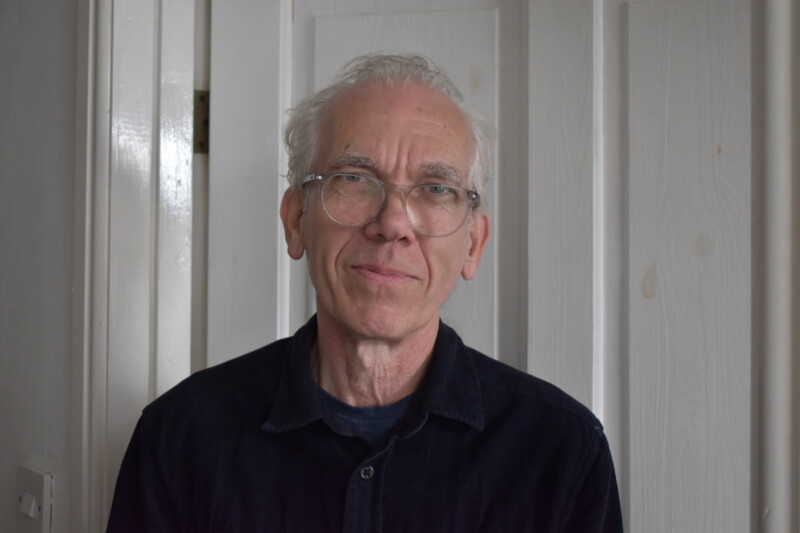 There is no silver screen, no beam of smoky light, no flickering phantoms of fantasy and desire; instead, there are men, mostly sitting alone, lost philosophers bent over pints of lager and laminated breakfast menus, staring into the hours that stretch ahead, into their haunted memories, into the broken moment.

I’m in a Wetherspoons in Liverpool ordering a cup of tea. Too early for an old friend’s funeral, I’ve come in here to get out of the rain. It’s 10am on a rainy Monday morning and ‘Spoons is already busy. It smells of rain-damp coats, bacon, sausages and beer and the rain seems to have followed me in and made itself at home.

Framed photographs on the walls show rows of awestruck faces staring out of darkness, stardust in their eyes. And I realise these people are sitting in this very building long ago: children at a matinee, roaring with laughter; lovers on dream dates, misty-eyed and swoony; men watching cowboy films, gunslinger moody.

Time slips, a slow fade into the past. Wetherspoons transforming into the Picturedrome, the cinema this building used to be, and for a fleeting moment I can see my mother – wearing Katharine Hepburn-style pleated pants and a belted swagger coat – arriving for her dream date with my dad. The film she’s been dying to see – Deborah Kerr and Jean Simmons in Black Narcissus – is just about to start. Her date, my dad, arrives and in they go, disappearing into the cinema shadows at the beginning of their future lives together. She loves the film but he’s not sure. He likes it because she loves it. He looks at her as she enters into the supernatural fever-dream of wild desire . . .

Slow fade back into the present moment. I turn to the barmaid and say, ‘My mum used to come here… when it was a cinema. . . before it was a ‘Spoons. . .?’ She looks at me blankly, ‘Didn’t know it was a cinema. Thought it was just a pub. It’s just some ‘Spoons.’ She looks at my funeral suit, sniffs at it, shrugs, looks away, makes herself busy with the J2Os. I take my cup of tea to a table, near what would once have been the silver screen, and I slow dissolve into my cinema of memory.

A beam of smoky light above my head, a corridor of cigarette mist moving through darkness, astral plane of fantasy and desire. Memories of saturation, immersion in shadow, atmosphere and smell – chewy juice of wine gums, pizzazz and jazz-spy glamour of Pearl and Dean music, mirage-mist of cigarette smoke, twisting through projector beam, dusty smell of ashtrays. Sensation overload as romantic as the actual films.

The Picturedrome was my mother’s local cinema, her twice-a-week dream palace where she would disappear into celluloid adventures. Romantic by nature, thrilled by glamour, fond of a dashing leading man – Stewart Granger in Madonna of the Seven Moons or Montgomery Clift in A Place in the Sun – she would travel by bus or tram to cinemas all over the city, the names of the picture houses like glamorous destinations, distant stars: Futurist, Essoldo, Majestic, Scala, Palais De Luxe, Rivoli, Trocadero. . . a dazzling, electric galaxy of rapture.

Often on a shopping day in town we’d slip into a cinema and get lost in the Sahara, a cattle-cowboy homestead, or a goldrush town in the Klondike. It didn’t really matter what the film was; it was the getting lost in dreamland we were after, slipping the bonds of Liverpool and time-travelling into fantasy. Cinemas were dreams.

Nostalgia for the queue (in memory it always rains, and we shelter beneath umbrellas), fleapit mustiness, taste of pear drops like acetone solvent, torch-beams of usherettes, back-row smoochers, choc-ice-sticky lips. I can’t remember ever watching a film from the beginning. We’d always arrive halfway through and see the end, before it looped back to the start and the opening credits rolled – an out of sequence logic of middle, end, beginning and often middle, end again. And when we’d leave the cinema, it would always be nighttime. And the world had changed.

In Wetherspoons I finish my cup of tea and sit there for a moment, looking at the room, fading in and out, from present to past and back again. In the present there are motes of dust, floating in phantom light, like memories and moments. Like hauntings. In the past there is smoke in the projector beam like signals from ghosts. The cinema is packed with families, lovers, loners, but all of them have come together to sit in the dark, become a congregation, become transformed by moving shadows and light. I have always found this incredibly moving – that we gather with strangers to gaze at phantoms – and when I see a building that used to be a cinema, and is now a carpet warehouse, or a gym, or a car park, a feeling akin to loneliness comes over me, of homesickness, of loss.

I leave the pub, cross the road and stand looking at the cinema in the rain. There’s a touch of the mosque about it, with its vault-of-heaven dome, but perhaps it’s more like the entrance to a raffish seaside pier. My mum started coming here in the 1930s, to matinee shows or to watch the Pathé news. My granddad would walk her to the corner of their street and wave until she was safely in the queue, and as I stand here, I begin to watch the moment, as if it is projected on the Picturedrome’s façade: damaged nitrate film stock, the street at dusk, lens flare of streetlights. A young girl in poppy-red waving in slow motion, her father waving back, waving through time, through shadow. As the cinema manager welcomes my mum into the lobby the film becomes pock-marked, blistered, bacterial, the scene slowly disintegrating, literally dessicating, back into the present moment. And then this street in Liverpool returns to its traffic jam and dirty-grey reality and the dream palace is once again a mediocre chain-pub in bad weather.

I stand there in the rain, remembering old cinemas. Leaving the Futurist on Lime Street, late 1960s, after watching Paint Your Wagon with my mum, I look up at a hoarding on the Scala next door advertising A Fistful of Dollars. Clint Eastwood stared down at me, stogie clamped between his teeth, Colt 45 raised against the western sky. It dawns on me that this mean-looking outlaw is portrayed by the same actor I’ve just watched pathetically singing about talking to the trees. It’s a portal moment of transformation – a passing from my mum’s romantic cinema universe into my own cinema landscape of savagery and apocalypse; from the embarrassment of sitting with your mum, listening to this excruciating mum’s music, to a sudden, jolting flash forward into Sergio Leone carnage and Peckinpah bloodbath.

Sometimes I stand outside derelict cinemas, or in car parks and empty lots where cinemas once stood. In these buildings, these dream cocoons and Art Deco ocean liners, these palaces and grottos, my mother once watched lovers kissing and I watched men kill other men with guns. My mother watched children running through Alpine meadows scattered with edelweiss and I watched longhaired outlaws riding Harley-Davidson choppers through the painted desert. My mother watched Calamity Jane singing ‘Whip Crack Away’ and I watched slow-motion Peckinpah shootouts and existential death. She loved – and I love it that she loved – to be entertained and emotionally transported, whereas I wanted to be unsettled and disturbed. But cinema became part of me because of her, because there had been times, particularly when I was a child when we entered magic kingdoms together and in darkness thrilled to tin men and lions, and chimney sweeps on rooftops.

When my mum was dying she mentioned Stewart Granger, dashing star of Madonna of the Seven Moons, the star who made her swoon. ‘I saw him once, in real life, on stage, in a theatre. He unbuttoned his shirt. . .’. This struck me as such a wistful thing to say it moved me to tears. ‘Do you ever remember going to the cinema?’ I asked her, and she replied, ‘I still go to the cinema. At least I do in dreams. . .’.

It’s time to go to the funeral. On my way to the church, it occurs to me I can tell my life story in visits to cinemas. When I was a child, wide-eyed with wonder. When I was a teenager, wild-eyed at Coppola. When I was a parent watching Ghibli in tears. Now that I’m old I still go to cinemas even though they’re derelict, or demolition sites, or car parks, or no longer there. In ghost cinemas, I gaze at the silver screen, the beam of smoky light, the flickering phantoms of fantasy and desire.

At least I do in dreams.

Jeff Young is a Liverpool-based dramatist for theatre, radio and TV. He broadcasts essays for BBC Radio 3 and collaborates with musicians and artists on audio installations and performance. His memoir Ghost Town: A Liverpool Shadowplay was published in March 2020 by Little Toller.