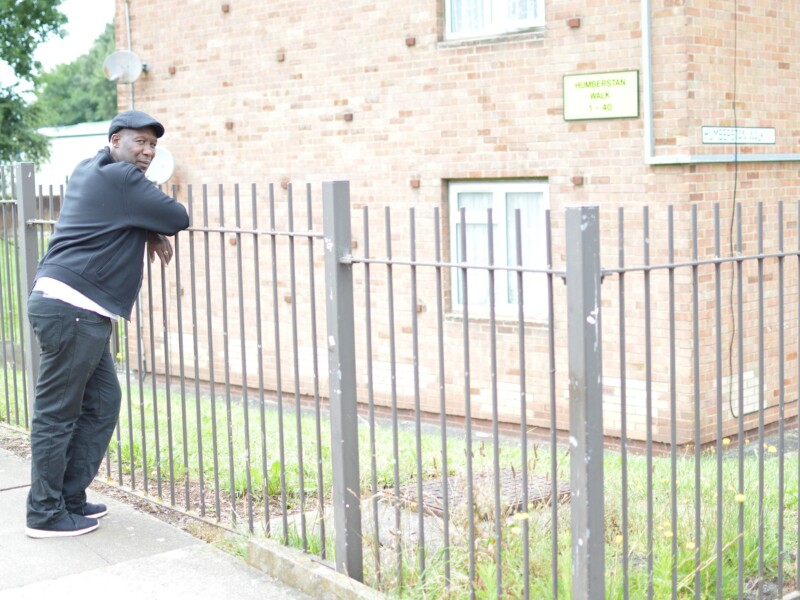 Large-scale council housing came into being through the 1919 Addison Act with a vision to build homes ‘fit for heroes’ returning after the First World War.

Over time, this vision evolved into one of providing homes that would be a sanctuary for people needing to build – or rebuild – their lives and for those on lower incomes looking for affordable rents. Council housing was a lifeboat for my mother and me from the mid-1970s until the mid-1990s.

After her divorce, my mother chose to move to Bristol. We lived in one room in a house of multiple occupation in Easton for over a year in 1975/76 and shared a bed that was no more than a big piece of foam on the floor. Mum’s efforts to gain more secure and stable accommodation were eventually successful. We were offered a council flat on the top floor of a three-storey block without a lift, on a 99 percent white working-class
housing estate on the outskirts of Bristol in Lawrence Weston. Mum didn’t drive, we were miles from friends and our black culture. My mum – not one of life’s complainers – got a job in nearby Shirehampton and made the best of our new environment.

Aged 11, I befriended an older girl at Lawrence Weston Comprehensive School who was also dating the local hardman. I was not untouchable, but I did now have someone to watch over me as no one messed with ‘Sally’. My quick wits meant I made a range of friends from different backgrounds. You could count the number of black families on the estate on one hand. I forged friendships with one family through Colin White and we became each other’s best-man at our respective weddings. Another friend, Tony ‘Pilch’ Pearce, is now a teacher in Brighton, a place we then only knew
through our Subbuteo football teams.

Due to my mother’s insistence I addressed all my friends’ parents as ‘Mr’ or ‘Mrs’. This meant I often got invited to ‘tea’, something my West Indian upbringing had no reference of but I intrinsically knew was an important occasion. I was always grateful for the cakes and sandwiches that would’ve sustained any cricketer at Lords. While I played with their children, these various parents would fill the gaps in the void left by the rest of my family being more than 120 miles away in London. We lived without fear of life’s everyday dangers. Soon we had a tight gang of kinship rather than terror. We fought, argued, laughed and cried together. Whenever one of our brood got into trouble, we took the musketeer approach. All for one and one for all.

The youth clubs, boxing gyms and a plethora of sporting clubs kept most of us away from the glue-sniffers, speed-freaks and junkies. At Avon Boys’ Club, we honed not only our football skills, but also developed sporting prowess in table tennis, darts, snooker and many other games. We learned teamwork, camaraderie, sportsmanship and time-keeping, even if I’m still working on the last one. We were drilled in a never-give-up attitude, no matter how better the opposition or inclement the weather.

I left school without qualifications, unprepared for what life would want from me because I didn’t have any expectations. I don’t remember a single conversation about furthering my education, let alone visiting a university. This is an irony I begin most of my lectures with today, as I’m now a part-time lecturer with UWE Bristol. Poor schooling meant my brothers-in-arms and I were viewed as cannon fodder for the nearby industrial factories at Avonmouth that belched toxic waste into our living space.

We were catapulted without a safety net into an adult world. Packed pubs beckoned us to an oasis of adventure. It was solace for those seeking to escape the routine with alcohol, music or the chance of a sweet illicit encounter: to turn the daily grind into a physical one. An honest day’s work or a small loan from a mate could sometimes be found to alleviate rising debt as unemployment levels reached one in ten levels (three million), making prospects for the unskilled bleak. The pubs on the estates were homes to midweek darts, skittles and pool teams and pre- and post-match meeting places for local football teams if you weren’t watching your beloved Rovers or City play away.

When he was a young boy, Marvin Rees and his sister Dionne briefly became our downstairs neighbours. Their mother Janet, like mine, had been grateful for the sanctuary and safety of a council home – though not for the local abuse. Our mothers became lifetime friends and I’m still proud that the young boy I saw then is now the Elected Mayor of Bristol.

I was annoyed when my car was broken into for its stereo and belongings, devastated when I was burgled, pleased when security doors were introduced to stop drunken passers-by using the ground floor of our block as a toilet. I became a father at 18 and had years of unemployment as my life swung violently out of my control, much like the rest of the country. Around me, I watched predominately black housing estates like St Pauls, Toxteth and Tottenham – three miles from where I was born – rise up in flames and rebellion fuelled by the humiliating ritual of aggressive stop-and-search policing.

I miss the banter and camaraderie of life on the estate. It could be vicious yet have the most acerbic observational humour of the finest stand-up comedians. It certainly helped to build my character, sharp tongue and canny pragmatic skills in response to an array of insults and challenges. There were no safe spaces and this sink-or-swim approach to growing up is not recommended for the faint-hearted. Gossip was given verbally, not via text and, in this vital currency, key information was exchanged such as where the local suspected paedophile lived. Our resilience meant we drew up a verbal risk assessment and would take the long way around that spot lest the troll come out to ply us with cheap alcohol or worse.

We walked or cycled everywhere, using today’s quaint relics such as telephone and post boxes as landmarks. As I grew older, I became more aware of the ritual racist abuse. I recall one vicious attack that took place when I was alone at a bus stop, which left me physically and mentally scarred. It was carried out by two assailants who shouted ‘Nigger’ at me, individuals who hated what they didn’t understand. I was lucky, I got up: Stephen Lawrence in similar circumstances did not.

Survival skills were honed over many skirmishes with a range of authority figures that were coming into my life. When my mum moved, I had the right to continue to rent our flat.

Living next door to one of the largest ports in the country, stolen goods were in ready supply. Our estate was full of its own Del Boy clones and dealers trying to make a living. Televisions, pirate videos, fake goods, drugs or whatever you required could be delivered to your front door for the right price without you having to leave your home. Nobody, however, was going to give any public ratings, because talking to anyone beyond your circle or crew was forbidden. Inevitable adolescent tensions appeared in our gang and, like many boybands, we split up.

One of my local pubs, The Penpole Inn, like other pubs that acted as social clubs across the country, has disappeared as we now suggest a ‘Netflix and chill’ instead of a rallying cry of ‘Cider I up, landlord!’.

Loyalty, straight-talking and a pragmatic no-nonsense approach to life are values I learned from living on that estate and still hold today. These values were identical to those I inherited from my family who were part of the Windrush Generation. When they arrived, they didn’t get homes for heroes, just signs that read ‘No Blacks. No Irish. No Dogs’. Excluded from council lists, some ‘parderned’ together in informal cooperatives to buy their own homes so they could make a major contribution to Britain after the Second World War.

I went to evening classes in secret, self-taught myself about my black culture, gained confidence, discovered who I was and dedicated the rest of my life to become all that I could be. I chose to ‘move out’ as a career beckoned belatedly at age 25. In addition, circumstances and maturity changed me from an estranged father to a lone parent caring for my son and a fresh start was demanded. More irony came as I became a trainee housing officer in Hartcliffe for my landlord Bristol City Council in 1991. I
turned my life of living in council housing into an 18-year career, rising to the rank of senior housing manager before redundancy in 2009.

Clint Eastwood was our Hollywood hero back then and I describe my time in Lawrence Weston as ‘the Good, the Bad and the Ugly’. The reality for a skinny, small, black kid on the brink of adolescence without immediate family or friends meant life was tough, but it was also the making of this man.

Roger Griffith MBE is an author, UWE Bristol lecturer and member of the Come the Revolution Film Collective.

THIS ESSAY WAS FIRST PUBLISHED IN 2019 AS PART OF THE HOMES FOR HEROES 100 PROgramme. Image: Roger Griffith revisiting where he used to live in Lawrence Weston, 2019 (photo by Stacie Flynn).