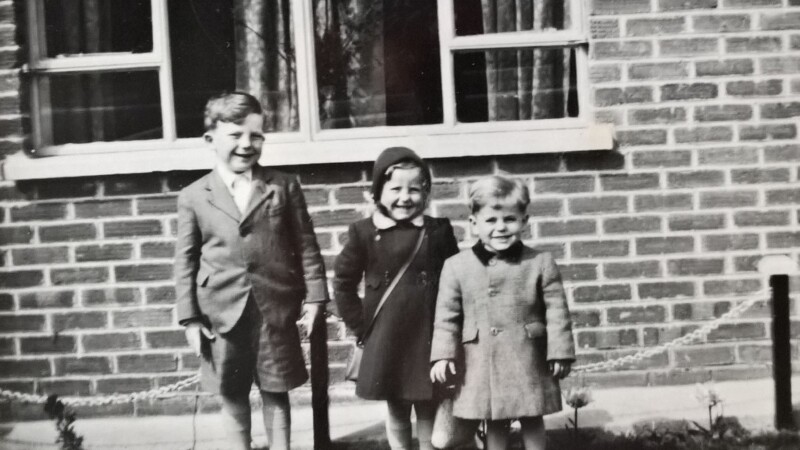 151 is probably not a number of much significance to most people, but to my family it instantly conjures a smile and a nostalgic gaze into the middle distance.

For my parents, 151 provided an opportunity to bring up their children in their own home and to escape the restrictions of sharing a house with Mum’s father and his partner, as they’d done for the first seven years of marriage. For us children – Maxine, Paul and me – 151 brought seven ‘green and golden’ years to our 1950s childhood: playing with friends in the garden or indoors; singing and dancing to records on the radiogram; helping around the house; and running free and safe in the streets and green spaces of a new council estate on the eastern edge of Cardiff.

Like many estates in post-war Britain, Llanrumney was planned in a spirit of optimistic re-construction, holding on to some of the principles of the garden city movement. Houses were brick-built in small rows rather than the long, dark-stone terraces associated with inner-city Victorian workers’ housing. Decent-sized front and rear gardens offered the opportunity to grow veg and to plant shrubs and flowers. Communal green spaces lent an open, airy aspect, as did the playing fields of Rumney Rec and the woodlands of legend-haunted Llanrumney Hall.

In Spring 1953, we were one of the first families on the estate. Dad had to go to work the day we moved in because he couldn’t afford a day off, so he cycled to Wagon Repairs Ltd in the docks where he was a carpenter while Johnny Workman’s van moved whatever possessions we had to 151. It was about a mile away from where we’d lived in a couple of rooms in Grancha’s house and I recollect myself, five-years old, holding hands with my younger sister, Maxine, and trailing behind Mum as she pushed baby Paul in a pram along the pavement on Newport Road. Number 151 sat on the crest of the incline up Llanrumney Avenue. A concrete path led to the porch and blue door; downstairs, a front room for best, a hallway and kitchenette, a small living room at the back; upstairs, three bedrooms and bathroom. A bonus was ‘the outhouse’: with a separate front entrance, it was a passageway to the back garden, big enough to store coal, bikes, tools, paint, toys etc, as well as having – wonder of wonders! – a second toilet.

To a five-year-old with little sense of time, it seemed no time at all before we were settled into our home. Mum and Dad papered the walls, with anaglypta in the hall and stairwell, pink floral patterns in the front room, and colourful exotic fish in the ocean of our bathroom. The kitchen was Mum’s domain, where she baked Welsh cakes and let us run our fingers around the mixing-bowl to scoop out the tasty leftovers. On Friday
evenings, when Dad came home, he handed over his unopened wagepacket which Mum emptied onto the worktop, a strict Chancellor of the Exchequer divvying up the cash for next week’s expenditure, slipping coins into our money-boxes out of reach on top of the kitchen cabinets. Of an evening, Mum did the ironing, humming along to tunes on the radio, while Dad gave us a bath upstairs and carried us down to dry us off in front of the living room fire, singing songs by the Inkspots or reciting little poems.

The living room was compact, with a fireplace, a dining-table and chairs by the window, one armchair, Singer sewing-machine and, eventually, a small television set. The coal fire was Dad’s major domestic responsibility. Up at 6.30am, he’d use a gas poker to set the flames leaping and for much of the year the fire blazed all day. From Wagon Repairs, Dad got cheap timber that he chopped into kindling in the outhouse, later setting up a little firewood business on the side with his father and brother. As well as board and card games, the dining-table served as a play structure for our games of imagination: a pirate ship, a stagecoach held up by bandits or, with blankets draped over the legs, a secret cave. If this seems like a rose-tinted picture of a carefree childhood in a harmonious family, I’m lucky enough to be able to say that it was extremely happy. Yes, there’s a hint of rose to it – the only shadow being the time that Dad went into hospital with a football injury and was off work for weeks: in the kitchen, I saw Mum in tears as she tried to work out how to make ends meet. There were probably other money worries in those austere times but, while my parents kept them from us, they always emphasised the importance of saving.

Our neighbours were couples in their 30s who’d survived the war and started young families – the Fletchers, Checketts, Wickhams and the Carrs in the corner-house with the big front garden and garage. Friendships came easily. With hardly any traffic, we organised noisy street games like touch, hopscotch and ‘Please Jack, may I cross the water?’, stretched a rope across the road and chanted skipping rhymes, roller-skated down the hill, sprinted to the lamp post and back, or spent all day down the Rec playing football, cricket and baseball – the Welsh version, native only to Cardiff, Newport and Liverpool over the border. Perhaps it’s a boy’s eye view but our parents didn’t seem anxious about us venturing all over the estate on our bikes or wandering down to Rumney River where the bridge at the end of Ball Lane gave access to open countryside.

Llanrumney’s name is derived from the Welsh ‘glan’, meaning ‘bank’ or ‘shore’, and the river that flows from the Rhymney Valley. Its sole historic building is Llanrumney Hall in Ball Road, built in 1450. It became home to five generations of the Morgan family whose most famous, or infamous, son, Henry, was born there in 1635. A ruthless privateer, Henry Morgan captured Panama for King Charles II in 1671 before being knighted and taking up residence in Jamaica –which is why there’s a Llanrumney on
that island, on riverside land that the slave-owner gave to his wife. When Cardiff Council compulsorily purchased the hall and estate in 1951, it made considerable provision for open space to be retained. Behind the hall, the woods became our Robin Hood glen where we galloped through bluebells and ferns on imaginary horses. On hot days, we discarded our daps and waded into the stream running down to the fenced-in lake we called the Fishpond. This was presided over by a fearsome warden who, so the story went, would lock trespassers in a room in the hall that was haunted by the ghost of Llywelyn ap Gruffyd, last Welsh Prince of Wales and allegedly buried on the site.

It never felt as though we were short of facilities, though perhaps expectations were fewer. Dr Chivers had his practice across the way. When the first No 48 bus chugged up the road, we ran alongside, waving at the driver and conductor. The sweet shop on Llanrumney Avenue kept us kids happy with its bubblegum, liquorice and gobstoppers. It wasn’t far to the enormous County Cinema for Saturday morning flicks. More importantly, a couple of primary schools and a secondary modern provided up-to-date,
spacious facilities and playing-fields. While I have only vague impressions of infants’ school, my four years in Bryn Hafod Juniors were times of creative learning, social education and healthy exercise. Tweed-jacketed headmaster Mr Lewis led an inspirational staff. All the girls had a crush on Mr Perry who took the sports teams. All the boys had a crush on perfumed Miss Macey with her stomach-melting smile and wicked temper – but we knew that Mr Perry and Mr Rogers, the Welsh teacher, were also rivals for her affections because the girls told us so. Mrs Bancroft took Standard
4 (Year 6 now), played piano for assembly with gusto and coached us through the 11-plus with composure and rigour. For me, it was Mrs Jones who made the biggest impact as she encouraged us all in Standard 3 to love music, poetry, art, nature, geography and to explore the exciting fields of knowledge that stretched before us. Arithmetic and spelling became energetic games. Story-times magically conjured up Welsh legends. Handwriting was a precious art. A short, elderly lady with long grey hair and dressed in black, she was called a witch by some kids and it’s true, she
could ‘give the eye’ that struck fear into the naughtiest child. But she was so enthusiastic and generous in her teaching that I’m certain it was her influence that led me to pursue a lifelong career in teaching.

In 1960, my parents took over the first of their two pubs in Cardiff so we moved to inner-city Canton, leaving behind us an estate full of friends, open air and adventure. A decade later, I took up my first teaching-post in Hartcliffe School in Bristol, and I know that for the five years I worked there, living close to the estate constructed as a 1950s housing initiative similar to Llanrumney, I felt that, although I was already knee-deep in a different social world, Hartcliffe offered an ID fingerprint from the past, a sense of home.

Robert Walton is a poet and playwright and a member of The Spoke, the Bristol poetry workshop and performance group. He teaches at the School of English, Communication and Philosophy at Cardiff University.

This essay was first published in 2019 as part of the Homes for Heroes 100 project. Image: Robert, Maxine and Paul Walton at 151 Llanrumney Avenue, Cardiff, c1955 (author photo).