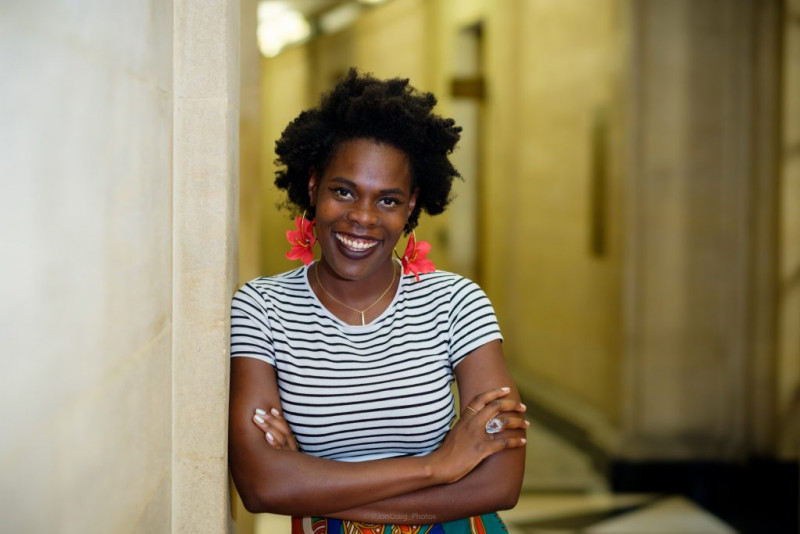 This is the second commissioned poem by Vanessa Kisuule, Bristol City Poet.

There’s been talk that carnival
Is dying – a cruel and common rumour
But carnival will humour non-believers
Cos carnival has claws and carnival has teeth
It’s a long line of dominoes
Cascading down the street
There’s an elder sat quietly in his room
He’s lost down memory lane
Humming a rocksteady tune
He still remembers the date
The skippety-skip of his heart
In 1968 – asking a pretty girl to dance
Radiant in her green dress
She smiled big and wide, of course she said yes

But here we meet at a bridge
Where we take time to sit, lick the same morsels
Of food from our fingers, sling each other’s music
On our bones, the melodies linger
See the young ones jig their limbs to old school raga
Maybe a grandad’s swagger finds new heat
Under the flames of a 140 bpm grime beat
We combine these genres on all the stages
The perfect blend of spices marinading
When the speakers call, nothing else matters
A carefree spill of cacophonous chatter – cheeky
Backchat back and forthKids giggle and scatter – getting up to all sorts
The corners of the streets sizzle and hiss
A world’s palette answers with culinary bliss
Jamaica, Trini, Guyana, flavours big and bold
Floating over Denbigh Street and City Road

The legacy of yesteryear’s among us: look around
The ghosts of carnivals past dance through
The crowds – what would
They reckon to carnival’s changing face?
Would they be proud, distressed,
Would they recognise this place?
We can only wonder – as
Airhorns pierce our ears and beats rumble like thunder
Rum-soaked rhythms writhing through us
These streets that have changed so much
From the rough ones of the Windrush
A sombre hush fills some people’s hearts
They miss the glory days – they feel too
Many things have changed

But perhaps a new age is coming through
One that we can shape and make our own
In a world that teaches us to keep our distance
To fear foreigners, fear change, fear time, fear difference
Old ways of distrust won’t hold a claim to us
Our kids play double dutch
In the same streets dismissed as dangerous
Tumbling out of tower blocks and locked doors
Where there’s no shared language, that’s what smiles were made for
We have many challenges – time to fight it or face it

Carnival is here, carnival is now, carnival is what we make it
It’s not about councils or corporations
Crushed cans of Red stripe underfoot, a mess,
A crush, a rush of red-eyed ravers defiling our city
This was lovingly built by committees who cared
Carnival is a heritage that trails through the air
Like BBQ fumes – we smell it, we see it, we feel it
This was how our ancestors
Grew home from the soil of colonial sin

So come sit, chill, dance, revel in it all
The feathers, the dancers and all the food stalls
The kids in their costumes and their parents
Dancing like its 68
Take a slice of the past and a piece of the future
Serve them both up on the same plate
This celebration was born in defiance of defeat
And so it will remain – this is not a sleeping beast
Carnival has claws. Carnival has teeth