Behind Bring Your Ideas 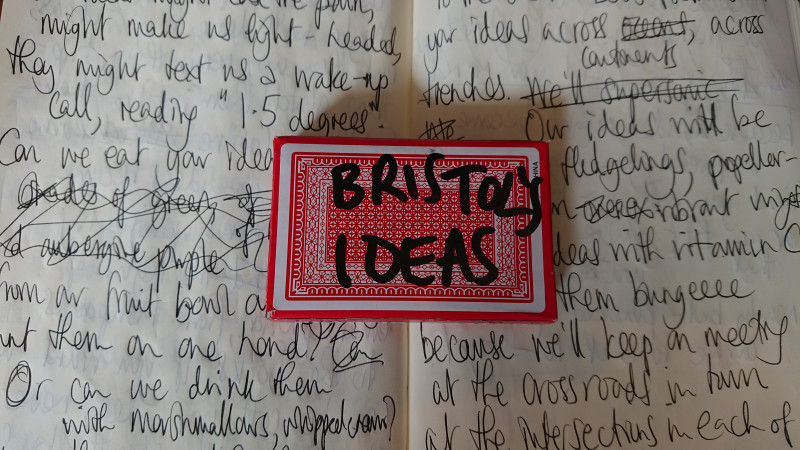 It’s one of the classic, and now rather clichéd, Q&A questions: ‘Where do you get your ideas from?’ But it’s also a valid one. So I’m going to tell you about the process of writing a poem for the relaunch of Bristol Ideas, using that question each time, but giving a different answer:

‘Where do you get your ideas from?‘

From a brief. When you write a poem for an organisation or event, it’s a great idea to be clear about what everyone wants, needs and expects. It’s the same if you’re a graphic designer, or a bathroom fitter. Making sure we’re all on the ‘same page’ (quite literally, where poems are concerned) is a great place to start.

From that, I got a sense of the tone, purpose, destination, audience. Then, I had some ‘composting time’ (a bit of conscious thinking, a bit of unconscious processing) about what I could write, the shape of the poem, the influences I’d draw on to make it.

From social media. We’d talked about including various ideas and inventions from Bristol. I asked around on Twitter and Facebook for these ideas and inventions. Helpful friends, local journalists who’d written articles on this, and others, suggested references for the poem. This gave me loads of potential ideas to work with.

From a spreadsheet. Yes, I made a ‘Bristol’s Ideas’ Excel – with names of people involved and links to websites. Who says creativity isn’t organised?

From research. For each of the references I added to the spreadsheet, I made some notes about that invention or idea, the historical context, the biography of the person involved, the interesting or surprising details of their lives. (Sidenote: I got a bit ‘stuck’ while reading about Hannah More and the Bluestockings. What a life!)

From a deck of cards. I love decks of cards, random generators, gamifying my writing process. I wrote the names of ideas or inventions on one side in Sharpie, then a couple of interesting details on the other. I shuffled them, sat down to write and wrote a line or two on one, before flipping over a card to see what was next. This brought about a lot of the more surprising images in the poem. Our discussions were that mixing up science and arts ideas in the poem would be good, so this ‘shuffling’ definitely did that!

By printing them out, cutting them up, and rearranging them. In other words: editing. With a longer draft, sometimes it’s helpful to print it all out, cut it up, and then physically rearrange it. That’s what I did with this poem: some of it was then discarded, while other parts got rearranged in a way which felt exciting, which started to work. It’s this version that went back into the word processor and became the version we filmed.

Through a process. Through development. From failures and flops. By seeking them out, asking for them, being open to them. By colliding, experimenting, and tinkering with them. By living in them.

There are still spare cards in my deck – so what are your Bristol Ideas?