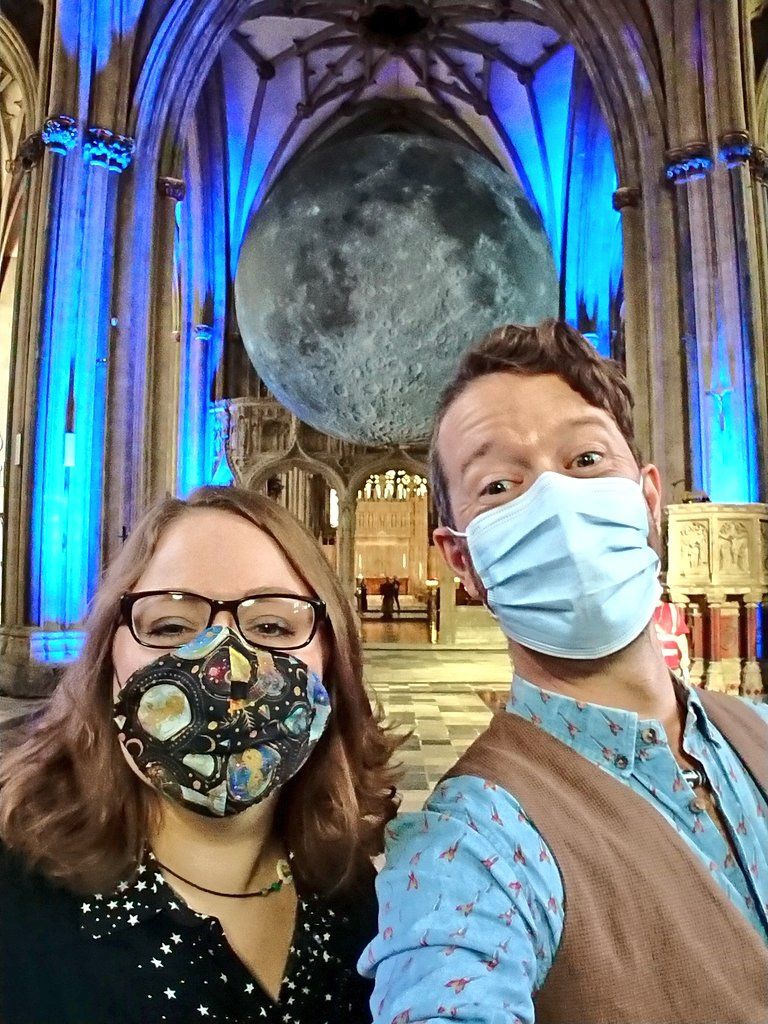 Almanac of Lunar Songs is a collaborative poem to be performed under the moon, real and/or inflatable.

The poem was commissioned for Museum of the Moon at Bristol Cathedral and was written by Miranda Lynn Barnes and Bristol City Poet, Caleb Parkin.

The poem is inspired by human and more-than-human lunar behavioural influences – from microorganisms to ‘supermoon baby booms’. It weaves through the various names given to the full moons each month.

The plough moon brings on spring, softened soils. Equinox moon.
Longer days, last of winter, earth’s movement emerging. Worm moon.
Earthworms surface, converge on winter’s wastings, fertile, gleaming.
In like a lion, out like a lamb, March brings the wind moon, crow moon.
Sweetness seeps from the birch and the maple beneath the sugar moon,
sap moon. How it glows in the half-light. How we ache towards the solstice.

Sibling Squid, Brother Bobtail: while you tremble, far up in the water
column, your body counter-illuminates, becomes nothing but undulating star-
and moonlight, seen from below. Fish Moon. Snow Melt Moon. Your body
no larger than a walnut. Egg Moon. Frog Moon. Your belly welcomes
a field full of bacterial glowsticks, dance party for Vibrio Fischeri, aliving
cloak of reciprocal light. Sprouting Grass Moon. Awakening Moon.

The bright moon, flower moon, closes the bivalve mouths
of Magallana gigas. O mother oyster, in the salt-charged sea,
the new moon means the skies are dark enough for you to feed.
Mother’s moon, milk moon, the supermoon draws near
to earth, gently tugs on our wombs, plucks the pearls of babies
into the world, under the light of grass moon, gloss of birth.

Bees put the honey in honeymoon. Mead moon. And the bees
stop buzzing during the solar eclipse, moon looming large
and shadow cast, lost light in daytime. At night, Comrade Carnica,
you eschew the moon in your waggle dances, but when the moon
is full, beams pull you from your hives to swarm, flight. Warm nights
like this, we put the mead to our lips in a honeyed kiss. Rose moon.

“How to create your own full moon ritual. How they can help unlock
your hidden desires.” Red berries moon. Hot Moon. Summer moon.
“How to align with the four phases of the moon. How to perform moon
rituals for manifestation.” Hay Moon. Herb moon. “How to hold a full
moon ceremony.” Buck moon. “How to tap into the spiritual energy
of full and new moons.” Claiming moon. Thunder moon.

O Limpet Love, hang on through the lug and shove of tides.
Dog Days Moon. Dispute Moon. Your radula is a diamond
spatula, a kevlar tongue on the sea rock’s algae fry-up.
Black Cherries Moon. Red Moon. Behold the jaunty cap
of your shell, while our umbrellas invert and our waters rise.
Hope, like the seasons, tilts. Lynx Moon. Swan Flight Moon.

Lady Luna, you pull on our waters, our dreams. We rise
to meet you. The corn moon saw our first touch of your face,
a rocket prosthetic, a glancing impact. Each passing month,
we strove to return. Millenia of poets, star-gazers, and singers
transcribed our desire. Song moon. Harpoon moon. Our feet
found your surface, the harvest of all our longing, tranquility.

Cold Moon. Dark Night Moon. Which invites Barrier Reef water to mingle
its alluring milieu. Precious Polyps, whose skin speaks fluent moonlight:
count the ways you love one another, your list which runs to trillions
of gametes. Create new constellations in pink-red, red-pink, a blizzard
of longing, a glitter of living probes. Beyond the Younger Hard Time Moon,
touchdown, away from the creeping bleachscape: we bid you settle, grow.