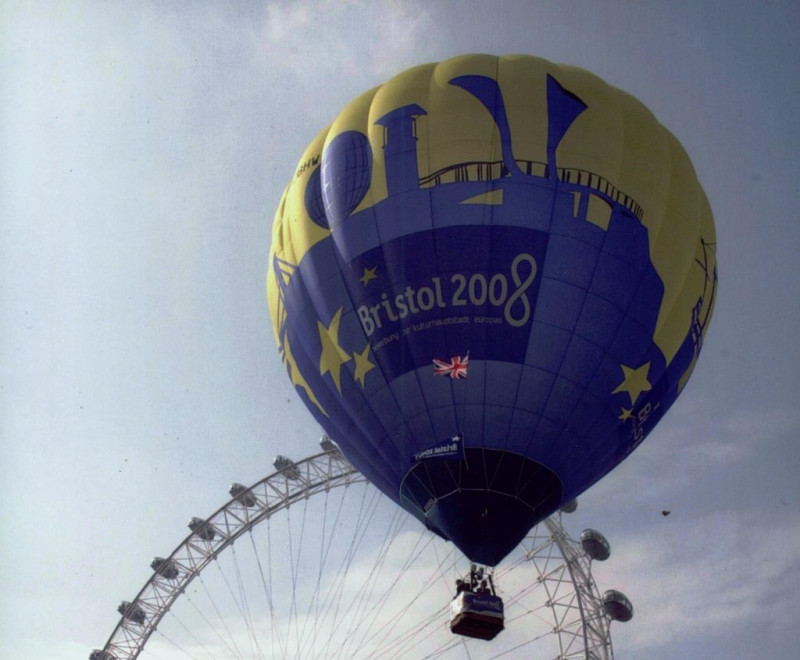 On 4 June 2003 Liverpool was named the European Capital of Culture for 2008, beating bids from Birmingham, Bristol, Cardiff, Newcastle and Gateshead, and Oxford.

The shortlist had been announced in October 2002 from a longlist that had also included Belfast, Bradford, Brighton and Hove, Canterbury and East Kent, Inverness and Norwich. Bristol’s bid had been led by Bristol Cultural Development Partnership (BCDP – the organisation now referred to as Bristol Ideas).

The European Capital of Culture initiative was launched in 1985 and is designed to:

Experience has also shown that the title can be an excellent opportunity for: regenerating a city; raising a city’s international profile; enhancing civic pride; invigorating a city’s culture; and boosting tourism. The selected host-state publishes a call for applications six years before the title-year. 2008 marked the second time the award was to be allocated to a UK city, the first being in 1990 when the competition was won by Glasgow.

BCDP began work on the Bristol bid as soon as rumours of the launch of the competition began to appear. Not only was there a chance to celebrate Bristol’s arts and culture widely, there was also the opportunity to run a campaign to further embed culture in a city growing in confidence about its offer within the city and outside of it. By the time the competition was launched officially, Bristol’s bid was well advanced. BCDP took the planning and campaign forward, taking advantage of all the work of the previous few years which had seen data collection, research and analysis of Bristol’s cultural strengths and weaknesses.

The vision for 2008 was that culture would reach the heart of every community in the city, with activity in homes and offices, shops and streets as well as cinemas, theatres, galleries, concert halls, parks and squares.

The aim was to get more people acting, dancing, singing, playing, climbing, reading, writing and swimming (sport was an integral part of the bid). By 2008 Bristol’s cultural facilities would be renewed and expanded including ambitious plans for a new world-class music centre to replace Colston Hall, a new Museum of Bristol and seven new swimming pools. Bristol2008 was seen not as an ending but as the next stage in the continuing development of Bristol as a creative and dynamic city at the heart of Europe.

The ideas for the bid had been developed in many ways: Andrew Kelly, director of BCDP, gave a series of presentations to many different cultural, educational, political and amenity groups and societies; a series of citywide debates and conversations led to the development of key themes; existing activity was mobilised with ideas developed through initiatives like At-Bristol and the Encounters festival; many one-to-one meetings were held with individual artists and cultural organisations; Arts Council England (though it could not help formally) contributed material looking at the regional perspective; and an attempt was made to bring the whole of the South West behind the bid (that achieved only limited success).

The shortlist judges liked the panache of Bristol’s proposals and were impressed by the range of cultural activities in the city and the regeneration of Harbourside. They were particularly pleased with the attempts made by the bid team to engage others as extensively and inclusively as possible. The campaign used the strapline ‘Let’s get it together’ as an indication of the collaborative, community-wide effort that was required. Among the items of promotional material created was a set of postcards and on-street posters featuring photographs of local people and the words ‘Here, here’: Anna, a performer from Cirque Bijou; Jane, a ferry skipper; Michael, a mechanical brush sweeper; Abdul and his team of butchers; Charlotte, a student. A joint photograph of both of Bristol’s football teams – City and Rovers – was taken to symbolise city unity (this proved controversial with both fans and players). Plans to ensure local commitment included presenting every Bristol citizen with their personal key to the city in 2007, giving them the right to participate in arts and culture and asking them to share in the responsibility of building a better Bristol.

The first Bristol2008 newsletter included a list of ten things Bristolians could do to support the bid. These were:

The 164-page bid document opened with an executive summary written in verse by local poet Fiona Hamilton. The spiral-bound book was ingeniously designed to resemble a ‘B’ for Bristol when closed and an ‘8’ for 2008 when opened. It was illustrated with specially commissioned photographs of Bristol landmarks and some of the people who supported the bid. A variety of poems on a Bristol theme where interspersed throughout the text.

The five objectives of Bristol2008 were:

The five main themes were:

Bristol’s cultural facilities were to be transformed during the build-up programme between 2002 and 2008. Arts projects referred to in the bid included:

Upgrading the city’s heritage sites and sporting infrastructure was identified as a priority and there were to be significant improvements to the city’s work on sustainability. With its facilities revitalised, gaps in provision filled, new festivals, training programmes and exhibitions and the city working together better than ever, by 2008 Bristol was set to be able to take full advantage of the cultural activity on offer.

The proposed 2008 programme was designed to bring together high- profile international extravaganzas and street events; activity in the city centre and in the city’s neighbourhoods; learning about the past and planning for the future. The centrepiece was to be the creation of 2008 new artists. The programme was driven by the people and for the people and designed to be of benefit to all who wished to participate.

There was a four-month gap between the submission and the final decision. Part of that period was spent answering the judges’ queries and on routine BCDP work. However, most of the time was used to plan the delivery of the programme. It had been agreed right from the start of the process that as much as possible had to be delivered as promised, win or lose.

The announcement in June 2003 that Bristol had been unsuccessful was obviously disappointing after all the work that had gone into developing the bid, building the partnership that would deliver the programme and securing the support of the city. It is fair to say, though, that this was not a surprise. It was always felt likely that the award would be given to a city in a less economically advantageous position than Bristol. Politically, Bristol was also in chaos in the final stages of the competition with a hung council and no-one taking charge. This had already created some nervousness on the part of the judging panel whose first question in the final meeting was about the problems in the council; this was repeated by at least one visiting judge.

What was odd was that the key reason given for not choosing Bristol was that the M32 split communities in the city. Few would dispute that intrusive major roads can be a problem (and one shared by other cities); what was odd was that when this appeared on the front page of the Bristol Evening Post it was the first time the bid team had encountered the reasoning – it had never been mentioned in the three years of the bidding process.

However, BCDP had already started to deliver its proposed build-up projects. This included the launch of the first Bristol Great Reading Adventure on 6 March 2003, an activity that succeeded in getting people of all ages involved in new cultural experiences across the city. In 2004 a comprehensive application was submitted to the Urban Cultural Programme (UCP), which set out how the city could deliver further on   the 2008 promise. The government, following pressure from Arts Council England, had established a fund for urban cultural projects to bid for from the Millennium Commission. This was open to any place – not just the shortlisted cities (which had been designated Centres of Culture). Bristol was awarded £1.56m to deliver a programme of cultural activity.

Bristol2008 was a catalyst for identifying opportunities to improve cultural facilities in the city. By 2004 there had already been positive news for many of Bristol’s cultural organisations including the award of Hub status for Bristol Museum and Art Gallery; new investment in Watershed; and a Heritage Lottery Fund grant of £11m for the proposed Museum of Bristol (later named M Shed). There was also increased coverage of cultural issues in the local media and new support for cultural activity generally.

The UCP Creative Bristol proposal was in five parts:

The UCP meant that Bristol could deliver many of the activities that were proposed in the bid. It saw a four-year programme of work that vindicated much of the stance that Bristol took in its application for Capital of Culture. It also meant that key initiatives, some of which were to grow to last nearly  a decade, and one, the Festival of Ideas, which continues today, could be tested  and established.

Bristol bid to be European Capital of Culture because it was already a major centre for culture in Europe. It was essential that Bristol was seen to be on a par with cities like Liverpool, Newcastle and Gateshead, Birmingham and Cardiff. It was essential, too, that Bristol had the confidence to bid.

By bidding, and achieving a shortlist place, it meant that many critics of the city at least appreciated that their criticism was misplaced. It meant that those outside the city judging the competition were able to see Bristol – some, for the first time in many years – and how much it had changed and how it was ambitious for a new future. It also meant – and this was a result of an ongoing campaign for culture – that the arts and wider cultural programming was embedded in the city council’s thinking and activity. That impact lasted for a long time.

The bid and the success of the shortlisting and the follow-up programme were also a vindication of the BCDP approach: culture embracing the arts and science; commercial and subsided operations working together; partnership in all ways of working; ambitious aspirations for all work. It showed that a small team could lead a major bid and campaign by utilising the partners it had. Most of all, it showed that Bristol could move forward, even in the midst of adversity. Losing the award did not mean the end of the Bristol2008 project; in many ways, it was just the beginning.

THIS ARTICLE WAS FIRST PUBLISHED IN 2018 AS PART OF THE PROGRAMME MARKING THE 25TH ANNIVERSARY OF THE FOUNDING OF BRISTOL CULTURAL DEVELOPMENT PARTNERSHIP (BCDP), THE ORIGINAL NAME FOR BRISTOL IDEAS. Photo: The Bristol2008 Balloon provided by Business West.