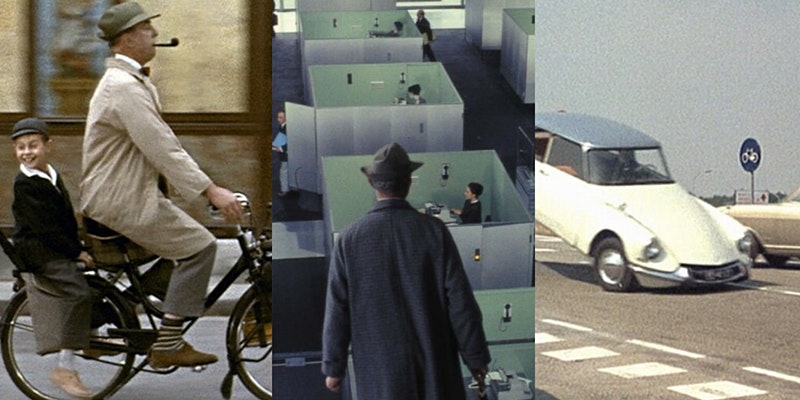 Running at Arnolfini on Saturday 2 April, the day will include screenings of three of Tati’s films, Mon Oncle, Playtime and Trafic, and discussions with speakers including Matthew Sweet (BBC Radio 3’s Free Thinking), Serge Bromberg and Catherine Wheatley.

Film historian Matthew Sweet is a writer and broadcaster and a regular presenter of BBC Radio 3’s Free Thinking. Sweet says: ‘As a long time admirer of Tati I’m delighted to be taking part in this joyous, immersive celebration of his work. Tati found a new way of doing cinema and a new way of looking at the world. He bankrupted himself in the process – but the work he left us contains riches.’

Three of Tati’s films will be screened, alongside introductions, panel discussions and audience Q&A sessions.

Jaques Tati’s multi-award-winning third feature, Mon Oncle (1958), is his first colour film and is a supremely amusing satire of mechanised living and consumer society that earned the director the Academy Award for best foreign-language film.

Tati’s gloriously choreographed, nearly wordless comedies about confusion in an age of high technology reached their apotheosis with his 1967 film Playtime.

Overlooked by many, Tati’s Trafic (1971) sees the bumbling Monsieur Hulot, kitted out as always with tan raincoat, beaten brown hat and umbrella, take to Paris’ highways and byways.

Andrew Kelly, Director of Bristol Ideas, says: ‘In our work looking at future cities, film plays an important role. Tati’s films look at cities and urban issues in unique ways. We can learn a lot from him as well as admire and enjoy the work of a great filmmaker.’

This programme is part of Opening Up the Magic Box, a heritage element of Film 2021 which marks the centenary of the death of Bristol-born film pioneer William Friese-Greene and the 125th anniversary of the first public cinema screening in Bristol, which took place at the Tivoli on 8 June 1896, as well as celebrating Bristol – a UNESCO City of Film since 2017. It is generously funded by the National Lottery Heritage Fund.

Tati Day is also part of Future City Film Festival, which this year is focusing on Paris on Screen. The festival normally takes place every two years in the autumn but had to be postponed last year due to the pandemic. It will now run through 2022 as a series of special events. We are grateful to the British Film Institute for their support for the festival.

Presented in partnership with