From Willie Green to Archie Leach With Charlotte Crofts 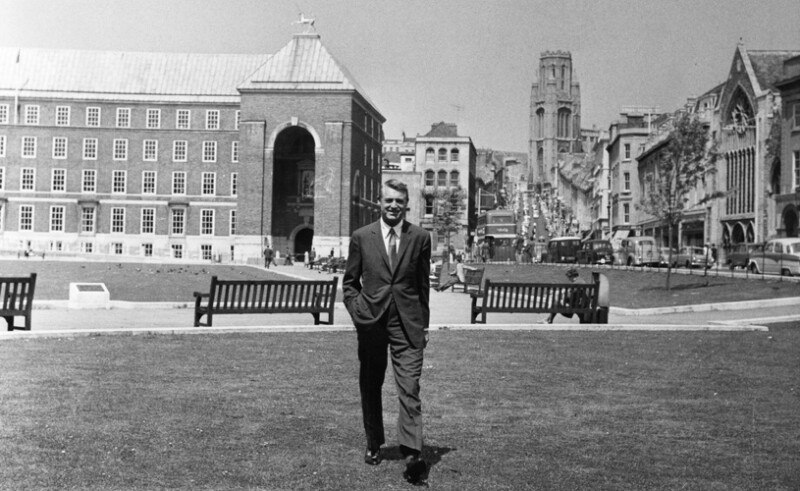 William Edward Green and Archibald Alexander Leach were both working class boys who grew up in Bristol. Willie reinvented himself as early cinema pioneer William Friese-Greene. Archie became Hollywood icon Cary Grant, one of cinema’s brightest and most enduring stars.

Grant was born in 1904 just six years before the first purpose-built cinemas sprung up in Bristol. How did Archie’s early experiences of the city’s theatres and cinemas fuel the wanderlust that propelled him to stardom? Which cinemas did he go to and what did he see? Can we discern any traces of his formative viewing in his later performances?

In this talk Charlotte Crofts maps how Bristol’s early cinema history informed the trajectory of young Archie who grew up at the same time as the birth of cinema itself. As The Wurzels once put it, ‘Cor blimey Cary Grant would still be Archie Leach | If it hadn’t have been for Willie Friese-Greene’ (from ‘Willie Friese-Greene’ on Give Me England).

Charlotte Crofts, Associate Professor of Filmmaking at the University of the West of England. Bristol-born Charlotte Crofts led on the successful bid for Bristol to join the UNESCO Creative Cities Network as a city of film and sits on the Bristol City of Film steering committee. She is director of the biennial Cary Comes Home Festival which aims to celebrate Cary Grant’s Bristol roots, develop new audiences for his films and recreate the golden age of cinema-going.

This free, online talk will be held over Zoom. Please book your place below. Details of how to join the session will be in your registration email. Please check your spam folder if the email does not arrive. Bookings close at 2pm on Thursday 20 January.